Charlotte, N.C. (January 8, 2016) – LendingTree®, the nation’s leading online loan marketplace, conducted an end-of-year survey to gauge American feelings towards their own personal finances in 2015. In addition to measuring their opinions, LendingTree asked if they had any financial regrets, and if they had any financial resolutions for the New Year. Interestingly, Millennials had the highest percentage of financial regrets in 2015 but were also more likely to set a financial goal for the coming year.

A Financial Overview of 2015
Overall, 2015 was a lukewarm year for most Americans. As of December 2015, only 12.65% of Americans felt they were financially in a great position. Nearly the same amount of people, 11.06%, felt they were in a bad spot and that 2015 was a very hard year, financially. Over half of Americans, or 58.22%, were somewhere in the middle, either fair or good, but stated they had room for financial improvement. The remaining 18.08% felt that at the end of 2015, they were not in a good financial position and it had been a year of struggle.

All of these numbers are slightly worse amongst Millennials. Amongst 24 to 34 year olds, 17.09% feel they were in a bad spot as of the end of 2015, with only 5.82% stating they were great, a significant difference from the national average. Millennials have the same leading financial regrets as the national responses, but in much higher numbers:

Only 11.27% of Millennials stated they had no financial regrets. Even with a better economy, Millennials continue to be frustrated by their inability to save and pay off student debts.

Outlook and resolutions for 2016
American optimism towards finances in 2016 is somewhat reserved. Only 10.76% state it will be a great year and that their finances will be fine. Most Americans feel the year will be OK with some financial ups and downs (39.94%) or that it will be a good year and a year for some financial improvement (30.18%). About 1 in 5 Americans have a pessimistic outlook on their personal finances for 2016 stating it will either be a bad or very bad year with money continuing to be a struggle or that personal finances may worsen. 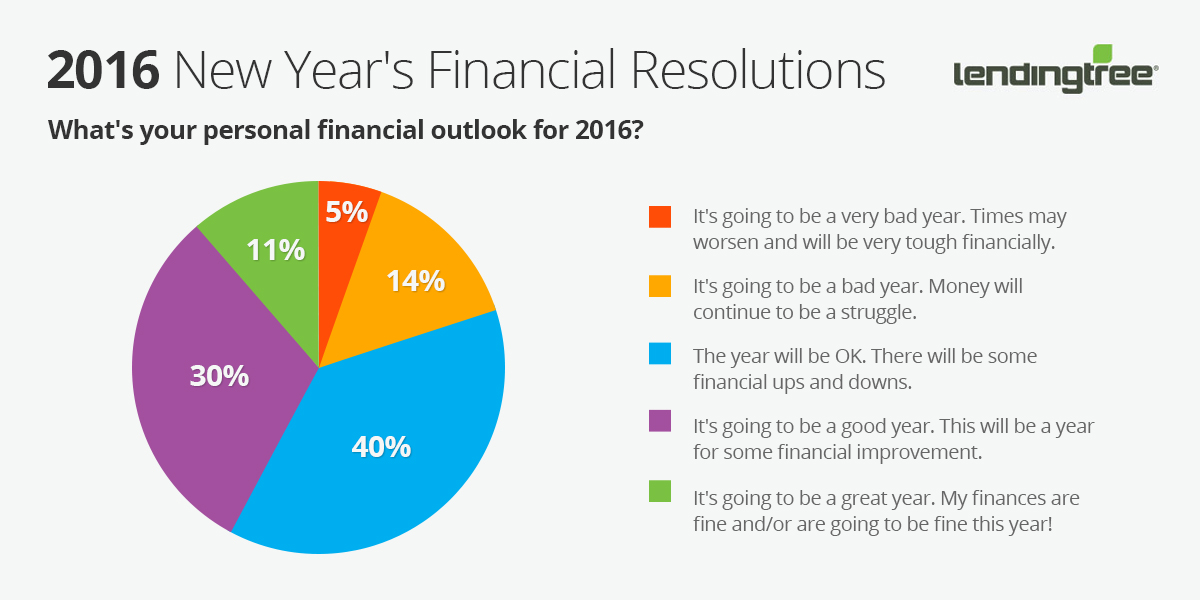 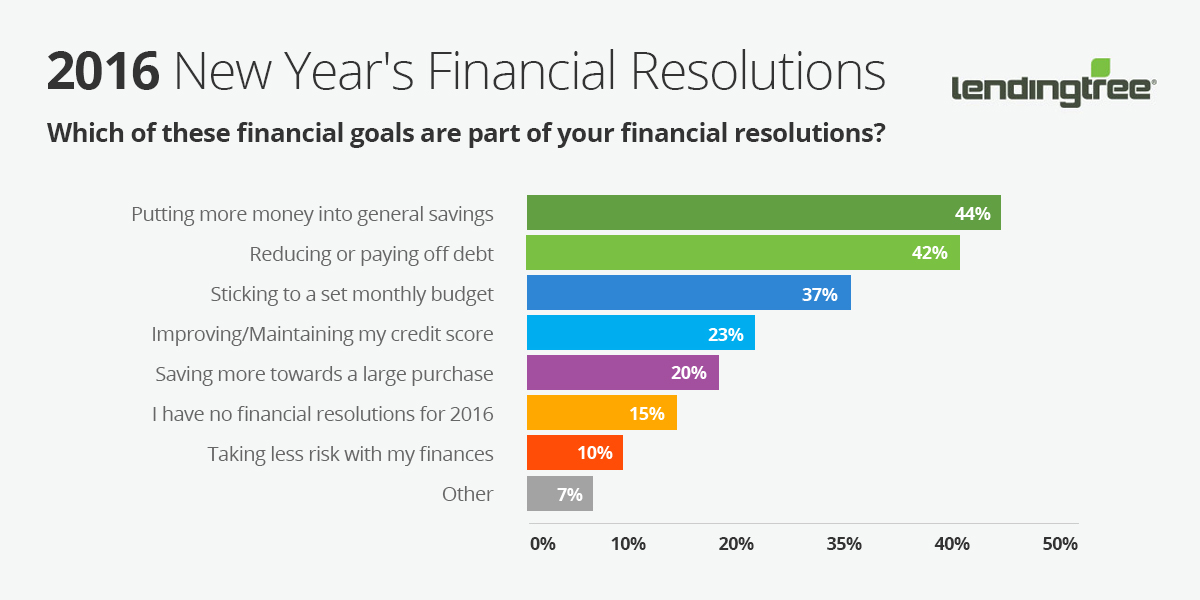 While Millennials may have trailed fiscally in 2015 by having the most regrets, Millennials were substantially more likely to include financial resolutions in their New Year’s goals with 93.82% having at least one financial goal. Millennials stated not only did they wish to put more into savings (64.36%), stick to a set budget (49.45%), and reduce debt (48.36%), they also were more likely to include saving towards a large purchase (36.36%) and improving their credit score (38.91%) as part of their resolutions.

And the 2016 housing market?
Even though financial outlook is reserved amongst Americans, the housing market looks pretty positive for 2016. Of the total survey respondents 5.43% of Americans, expect to purchase a home in 2016. About one in five Americans (19.17%) said they may purchase a home depending on their financial situation and available opportunities. Within this pool of potential homebuyers in 2016, 37.85% will be first-time home buyers, of which almost 43% will be Millennials.

Based on the survey data, first-time home buyers will be largest home buyer group, followed closely by current homeowners looking to change homes (36.23%). Of potential homebuyers, 13.36% will be previous homeowners, now returning to the home buyer market. These numbers may include normally active homeowners in transition or homeowners who may have lost a home during the housing crisis. Because the housing 2015 marked the seventh year since the 2008 housing bubble that caused many foreclosures. This is significant as a foreclosure remains on your credit report for 7 years.

In terms of supply, 4.64% stated they plan to sell their homes in 2016. 14.40% may sell their homes depending on the situation. Based on these numbers, there may be more housing demand than there will be housing supply in 2016 creating a very competitive market for shoppers. With the recent increase in interest rates by the Fed, plus hot market competition, we may see some want-to-be homebuyers, priced out of the market, until at least supply, especially affordable starter homes, meet demand.

Methodology
The LendingTree 2016 New Year’s Financial Resolutions Survey was conducted online within the United States by SurveyMonkey on behalf of LendingTree between December 14 and December 17, 2015 among a sample of 2,008 Americans ages 25 and up.

About LendingTree
LendingTree (NASDAQ: TREE) is the nation's leading online loan marketplace, empowering consumers as they comparison-shop across a full suite of loan and credit-based offerings.  LendingTree provides an online marketplace which connects consumers with multiple lenders that compete for their business, as well as an array of online tools and information to help consumers find the best loan. Since inception, LendingTree has facilitated more than 55 million loan requests. LendingTree provides free monthly credit scores through MyLendingTree and access to its network of over 350 lenders offering home loans, personal loans, credit cards, student loans, personal loans, business loans, home equity loans/lines of credit, auto loans and more. LendingTree, LLC is a subsidiary of LendingTree, Inc. For more information go to www.lendingtree.com, dial 800-555-TREE, like our Facebook page and/or follow us on Twitter @LendingTree.