CHARLOTTE, N.C., January 10, 2018 – LendingTree®, the nation’s leading online loan marketplace, recently conducted an online survey among 1,025 Americans to gauge financial expectations, concerns and overall sentiment regarding personal finances for 2018. According to the results, two out of three Americans have an optimistic outlook for the year ahead, with millennials being even more optimistic.

Looking back on 2017
According to the survey, almost half of Americans (45%) feel that 2017 was at least somewhat better than 2016 in terms of personal finances. Approximately one third (34%) earned more in 2017 than they did in 2016, 24 percent put more into savings in 2017 compared to 2016, and 21 percent improved their score over the past 12 months. However, only 16 percent reduced their total credit card debt, making debt reduction a priority in the year ahead.

Optimism in 2018
The survey found Americans generally have an optimistic outlook for 2018, with 67 percent expecting personal finances to improve over the next 12 months. Fewer than 10 percent of respondents said they expected their finances to worsen in the year ahead. Today’s economic indicators could be contributing to the positive outlook, with jobless rates at a 17-year low, home prices steadily climbing in most markets and stocks continuing to rally. 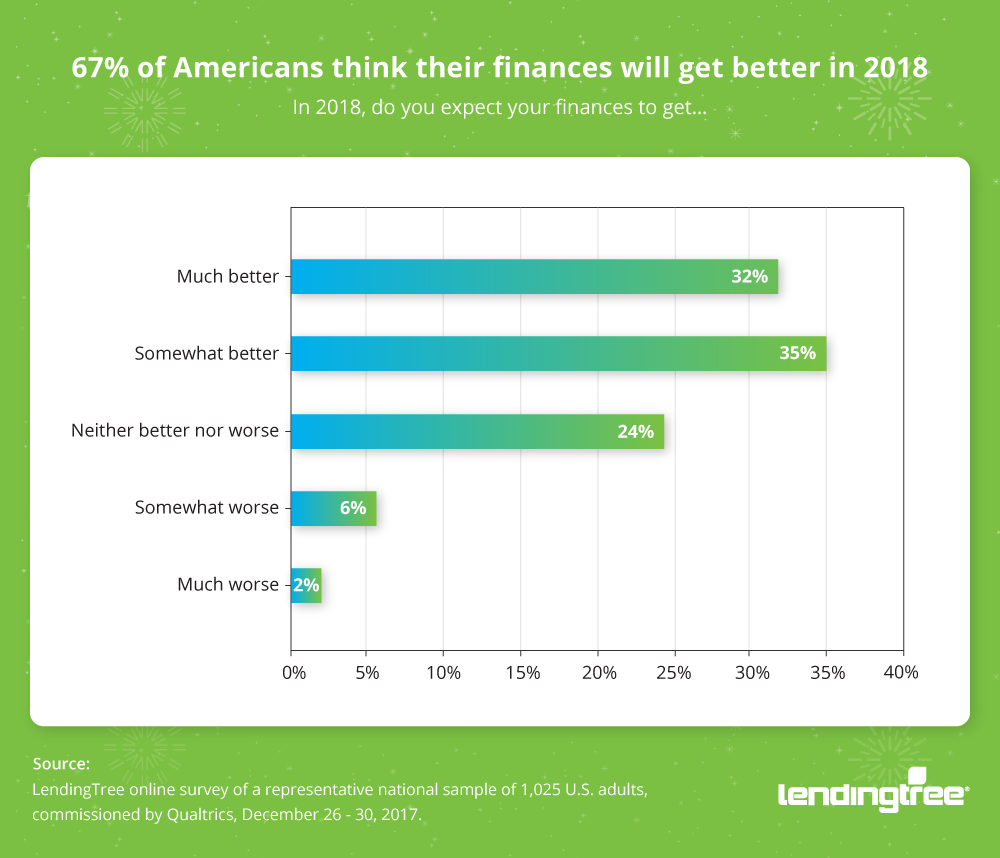 Additional positive expectations for 2018 include:

Making changes in 2018
The survey found that many people are planning on making some changes that may affect personal finances in 2018. Twenty-seven percent of respondents expect to purchase a new car in 2018. This was followed by 23 percent who plan to move or relocate sometime this year, 20 percent who expect to switch jobs and 13 percent who believe they’ll become homeowners in 2018.

Financial concerns still loom
A sunny outlook for 2018 finances doesn’t come without at least some financial concerns. Americans feel most uneasy about unexpected expenses (43%), followed by their ability to make ends meet (34%), which may be why 27 percent are hoping to build an emergency fund and 26 percent are hoping to put more into savings in 2018. Healthcare costs come in third place with 29 percent, although healthcare expenses ranked second (40%) for those over age 50.

The 35-and-under crowd echo the financial concerns of other generations, with 39 percent of millennials stressing about unexpected expenses and 30 percent worrying about their ability to make ends meet. 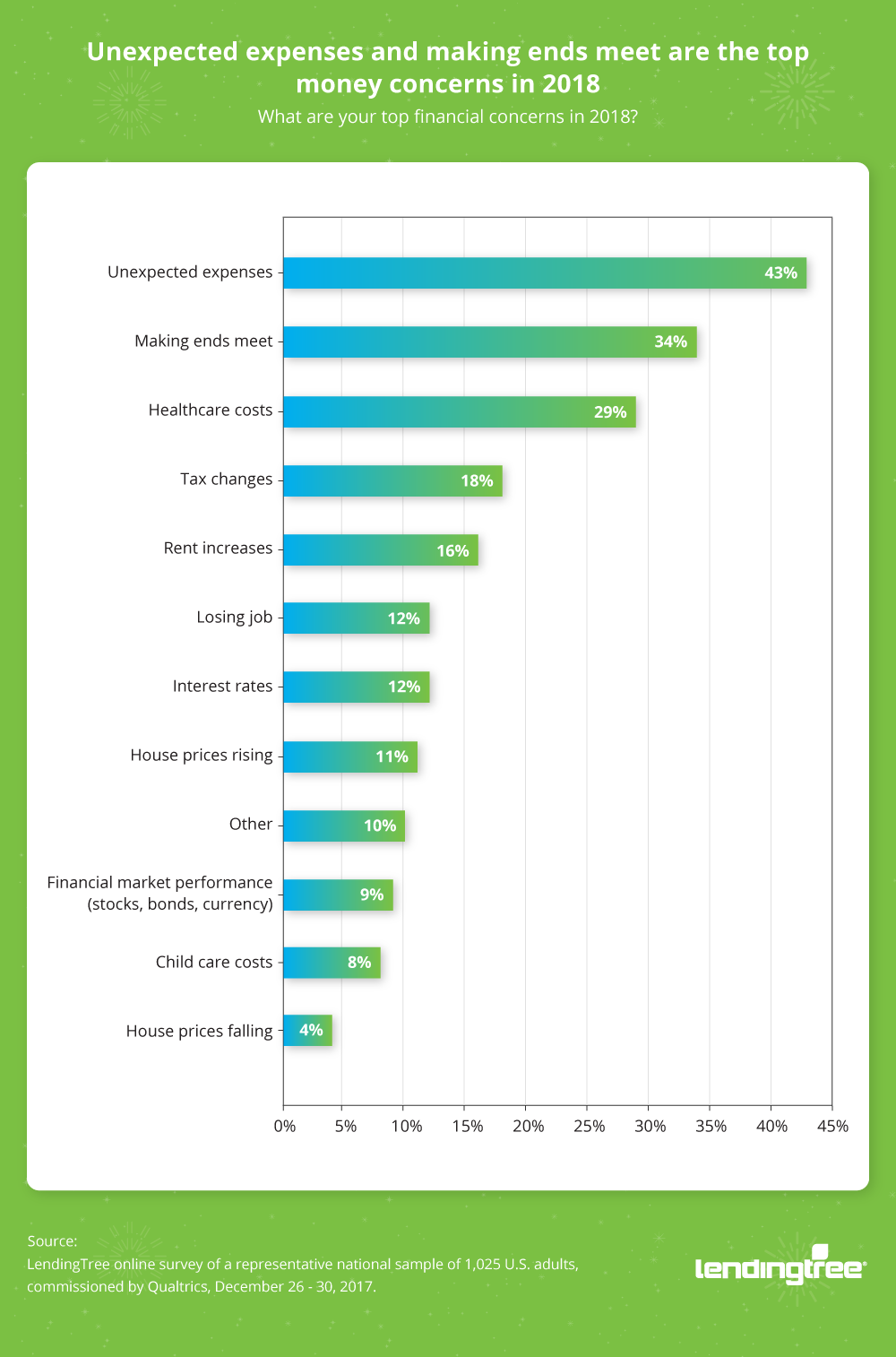 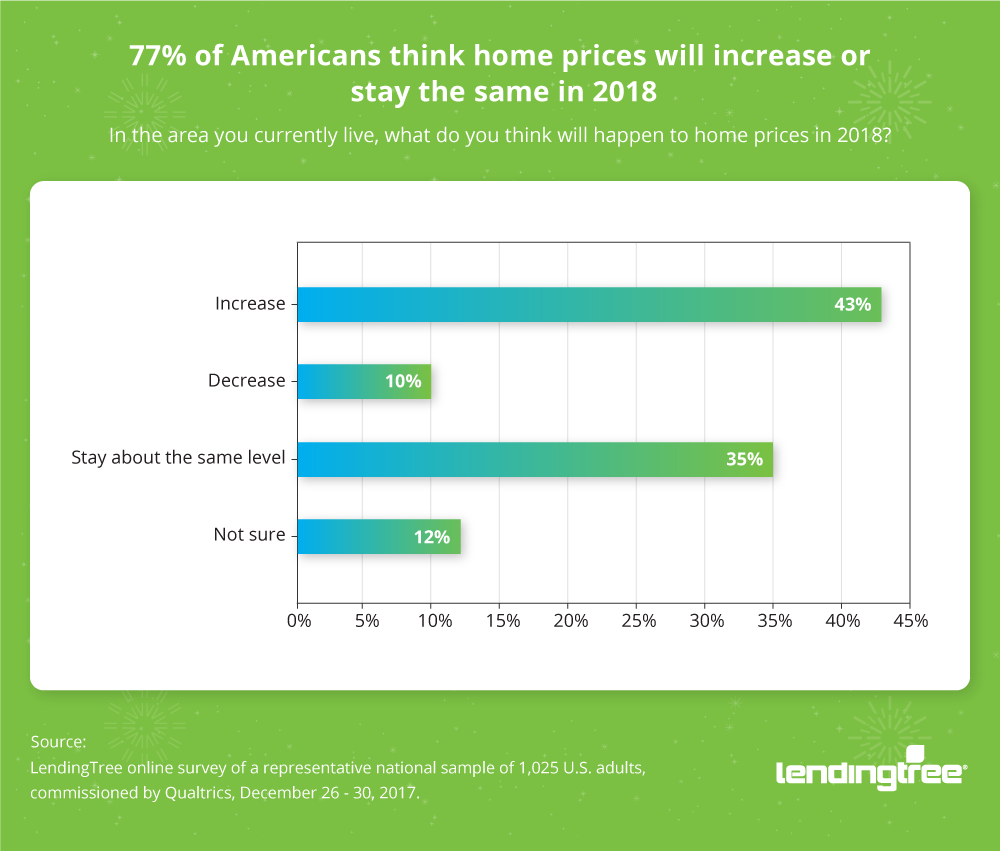 Debt reduction is a priority for many Americans, with 36 percent of survey respondents saying they’d use a $10,000 unexpected windfall to pay down debt. For contrast, 14 percent would invest the money, 13 percent would spend the money on family and 10 percent would use those funds for home improvement projects.
Despite some uncertainty about the specifics, Americans expressed that paying off debt was the financial matter they were most confident about accomplishing in 2018, outpacing that of controlling spending and increasing income. Thirty-one percent said they were confident they would pay off debt this upcoming year, followed by 27 percent who were confident they would reign in unnecessary spending and 19% who felt confident about receiving a raise. Most people chose the financial concerns they have the most control over (like controlling spending and paying down debt) than more economic matters that were largely out of their control (like home prices and financial market performances). 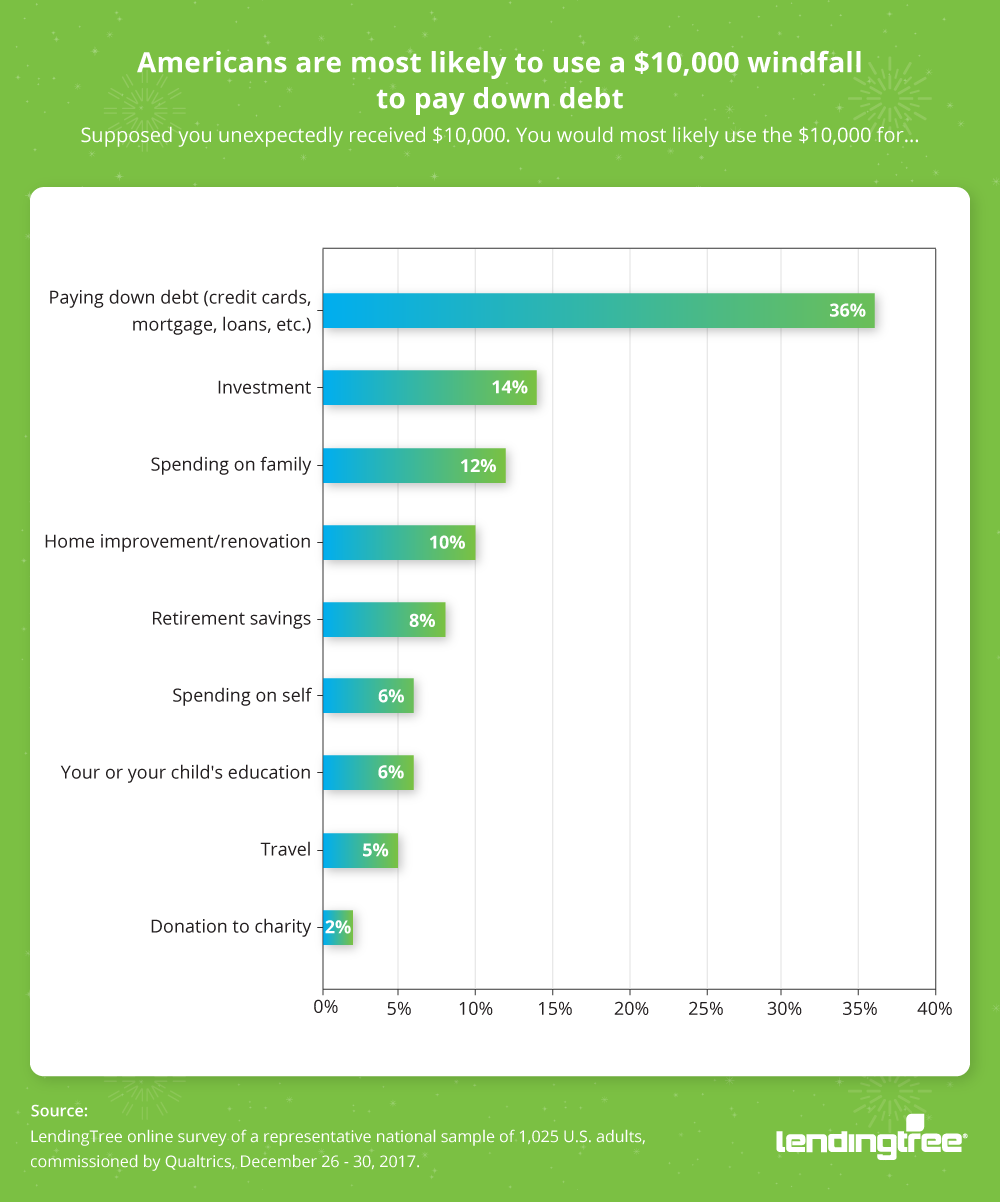 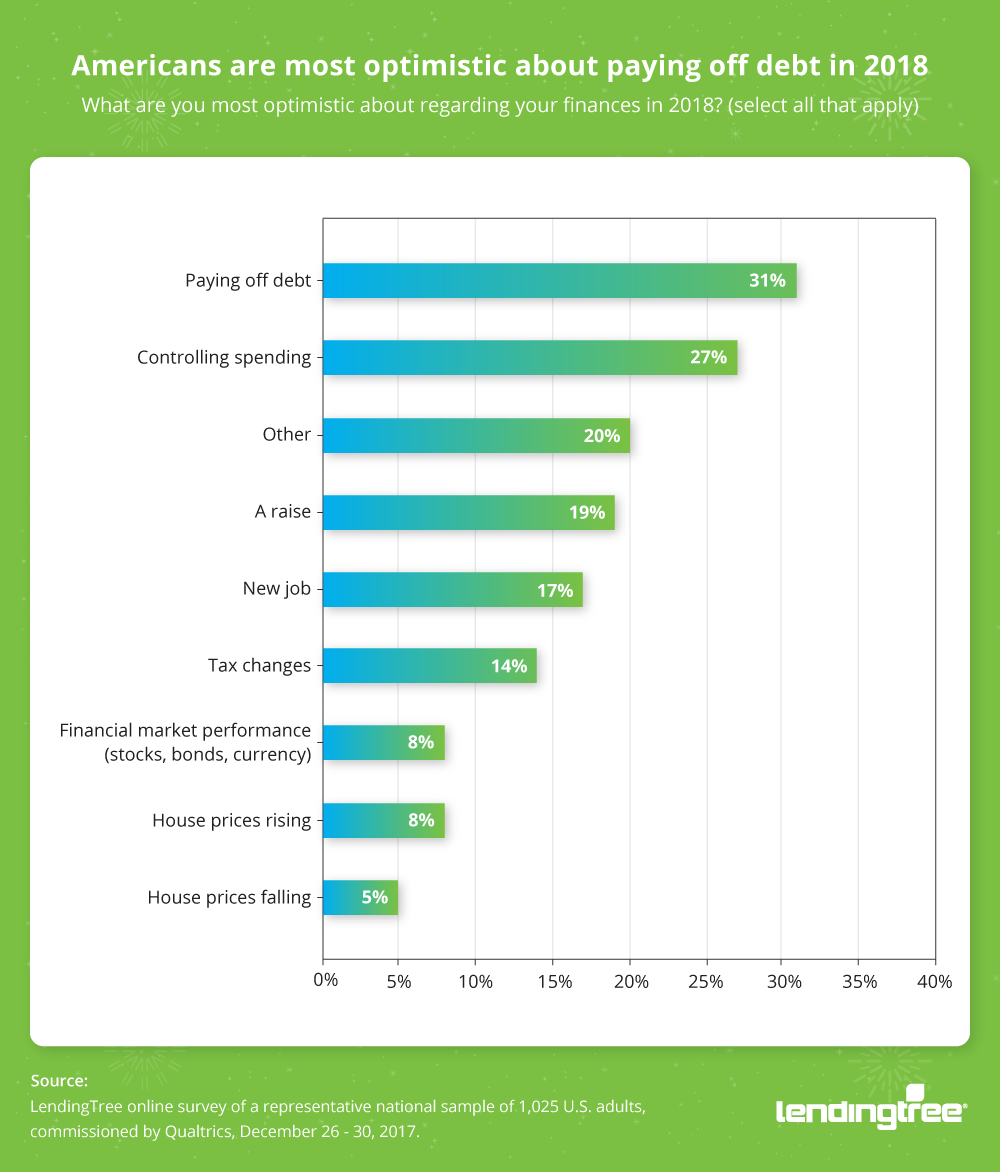 To view the rest of the survey results, visit https://www.lendingtree.com/finance/resolutions-and-goals-2018/.

Methodology
LendingTree surveyed more than 1,000 Americans on their financial goals and sentiments in December 2017, and commissioned Qualtrics to administer the survey on December 26-30, 2017.