CHARLOTTE, N.C., Feb. 21, 2018 – LendingTree®, the nation's leading online loan marketplace, today released the findings of its study on the best cities for those seeking a fresh start. New beginnings are an American tradition, and it's not uncommon for people to lose so much that they have to start over with new jobs and careers, new finances and even new relationships. The likelihood of success can depend in part on social and economic conditions.

In this new study, LendingTree analyzed eight variables in the largest 50 metros in the U.S. to determine which cities would most likely give someone the boost they need to start a career or build their finances from scratch.

First, the study looked at eight elements to consider when going through a financial recovery, such as the local median income and rents, and if the state has laws to protect debtors from aggressive collections and penalties, in case methods like debt consolidation or refinancing to lower rates aren't enough to manage liabilities.

Next, to determine what opportunities there might be for people seeking a solid job and income, the study looked at the percentage of people in these metros who are between the ages of 35 and 64, single, employed, have health insurance coverage and are currently enrolled in school.

Lastly, to get an idea of how well people in an area are recovering from financial calamity, LendingTree calculated how quickly credit scores are rising after a bankruptcy by using proprietary data on the average credit score, on a geographic basis, of LendingTree customers who declared bankruptcy between three to four years earlier.

1. Buffalo, N.Y. – 67.6
At $738, Buffalo has the lowest median rent among the 50 cities reviewed, and 94 percent of adults over the age of 35 are insured (second highest). Residents who declare bankruptcy have an average credit score of 664 three years on, tied for the second highest score for the cities reviewed, suggesting that conditions are favorable for financial recovery. However, Buffalo ranks poorly in two metrics: at $52,303, median income is the seventh lowest, and only one other city has fewer students over the age the 35.

2. Minneapolis – 62.9
At just 3.7 percent, the exceedingly low unemployment rate for citizens in Minneapolis between the ages of 35 and 64 helps push the city to the No. 2 spot. Not only are most over-35s employed, but they also earn a median salary of $70,915, the eighth highest in the cities reviewed, 94 percent have health insurance and median rents are relatively low at $963.

3. Salt Lake City – 62.6
Only two other cities have more over-35s enrolled in school (Virginia Beach and Washington), and only five have more unmarried over-35s (New Orleans has the most). That could be due to the lowest unemployment rate for over-35s of any city reviewed (3.6%), and higher-than-average median income of $64,564 for that same group. That combines nicely with a moderate median rent of $967. 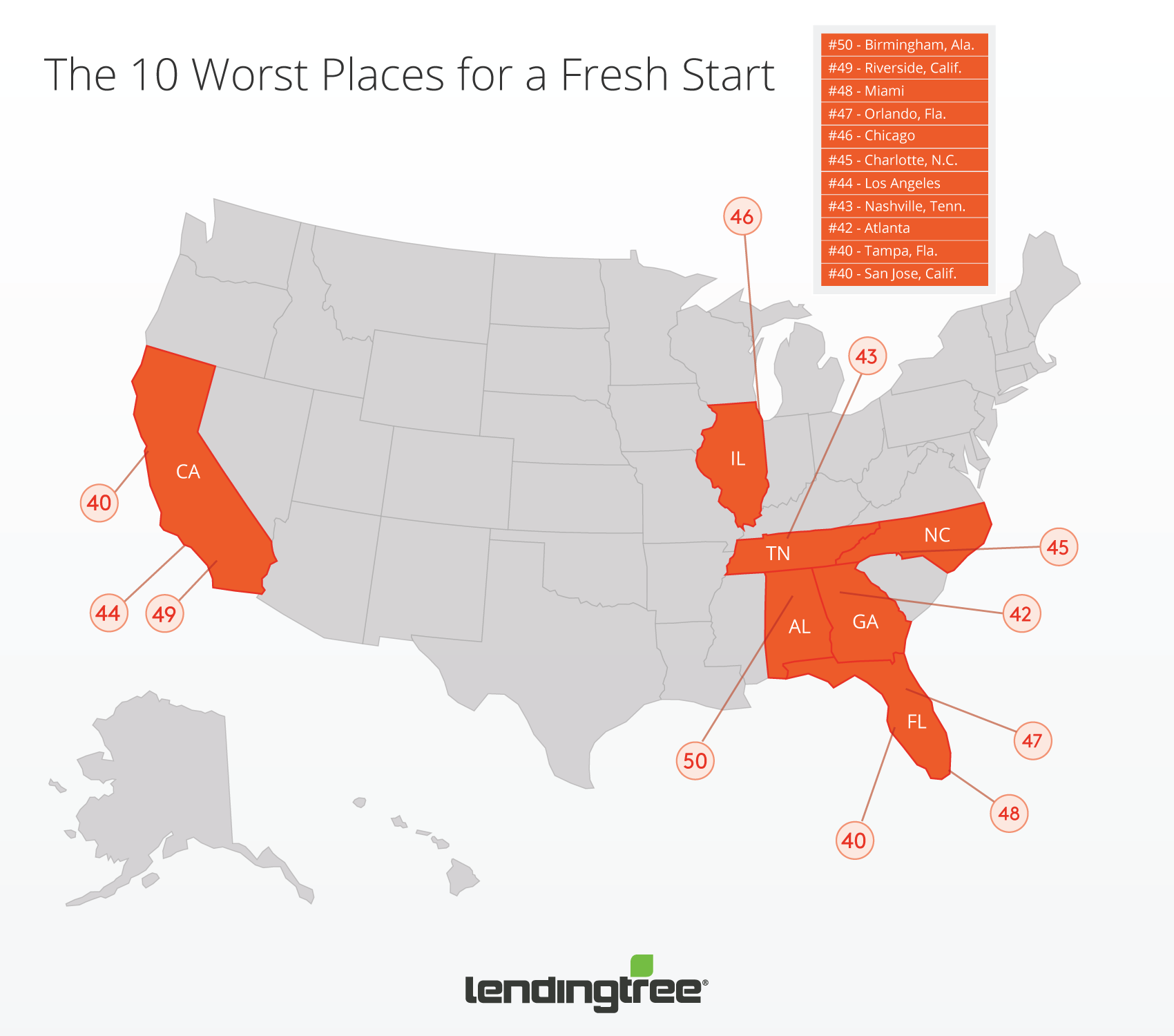 50. Birmingham, Ala. – 32.9
Among people between the ages of 35 and 64 living in Birmingham, just under a third are unmarried, 5.1 percent are unemployed and 87.3 percent have health insurance. Only 2.3 percent of that same group are enrolled in school (the third fewest of the cities) and median income for everyone is $50,539 (the fifth lowest). Most troublesome, Alabama received an "F" from the NCLC for poor debtor protections, and residents have an average credit score of 633 three years after a bankruptcy.

49. Riverside, Calif – 35.8
The biggest ding against Riverside is the 8.1 percent unemployment rate for people between the ages of 35 and 64, the highest of all the cities. That might explain why only 81.7 percent of that same age group has health insurance.  Median income for all groups is in the middle of the pack at $56,295, but median rents are the 10th most expensive at $1,176.

48. Miami – 36.4
Median incomes of $50,064 are the third lowest, median rents of $1,182 are the eighth highest and 6.8 percent unemployment for over-35s is the fourth highest. At just 74.7 percent, Miami has the lowest health insurance coverage for over-35s. One potential bright spot for singles: 36.4 percent of people between the ages of 35 and 64 are unmarried, which is the third highest in the cities examined. 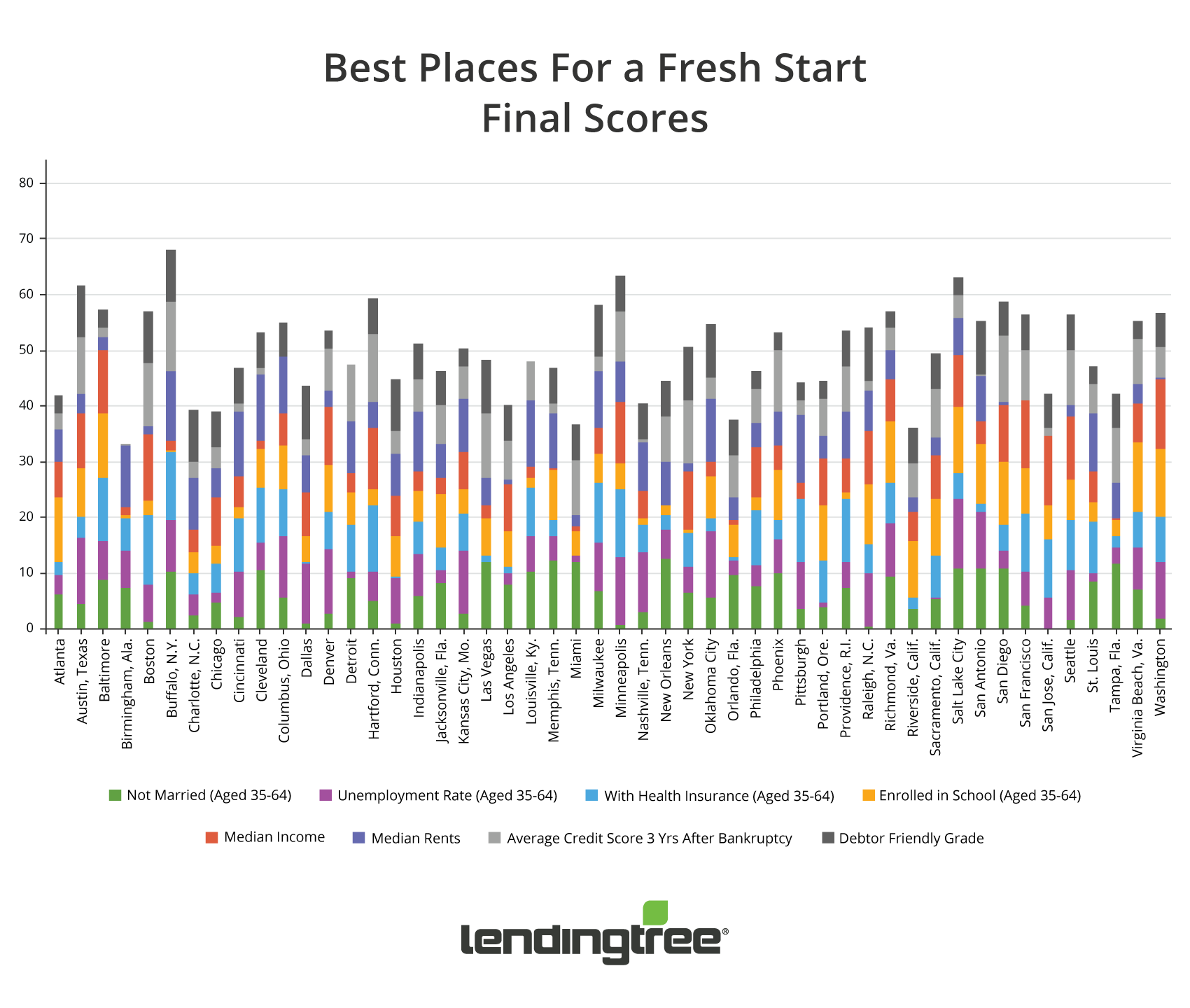