CHARLOTTE, N.C., November 5, 2018 – LendingTree®, the nation’s leading online loan marketplace, today released its State Migration Study on where Americans are moving. The study looked at where people moving out of state are going and discovered that of the 12.1 percent of homebuyers across the country who change states, most plan to head south.

LendingTree reviewed more than 2 million new purchase mortgage loan requests for primary residences in all 50 states in 2018 (through mid-November) to find what percentage of all requests were from residents looking to move outside of their current state and where their destination would be. The results reveal the most popular new locations for homeowners in each state, along with the states with the highest percentage of requests to move to other parts of the country.

Key findings
Florida is the No. 1 destination. Florida was the top new destination for 15 of the 50 states. Of all purchase mortgage requests during the study’s period, 9.1 percent were for Florida. For out-of-state movers, 12.4 percent of requests were for Florida. The Sunshine State has a long history of bringing in visitors and new residents, particularly retirees.

South Carolina is the top destination when adjusted for population size. LendingTree created a Moving Popularity Score Index* to analyze destination states adjusted by population. South Carolina scored highest, as mortgage loan requests from out-of-state movers were 52 percent greater than suggested by its share of the national population. Other popular states by this metric are Florida, Delaware, Georgia and North Carolina, revealing a Southern tilt in the preferences of out-of-state homebuyers. At the other end of the spectrum, homebuyers are least attracted to South Dakota, which received just 64 percent of the loan requests its population would suggest. Hawaii, Minnesota, California and New York complete the bottom five. 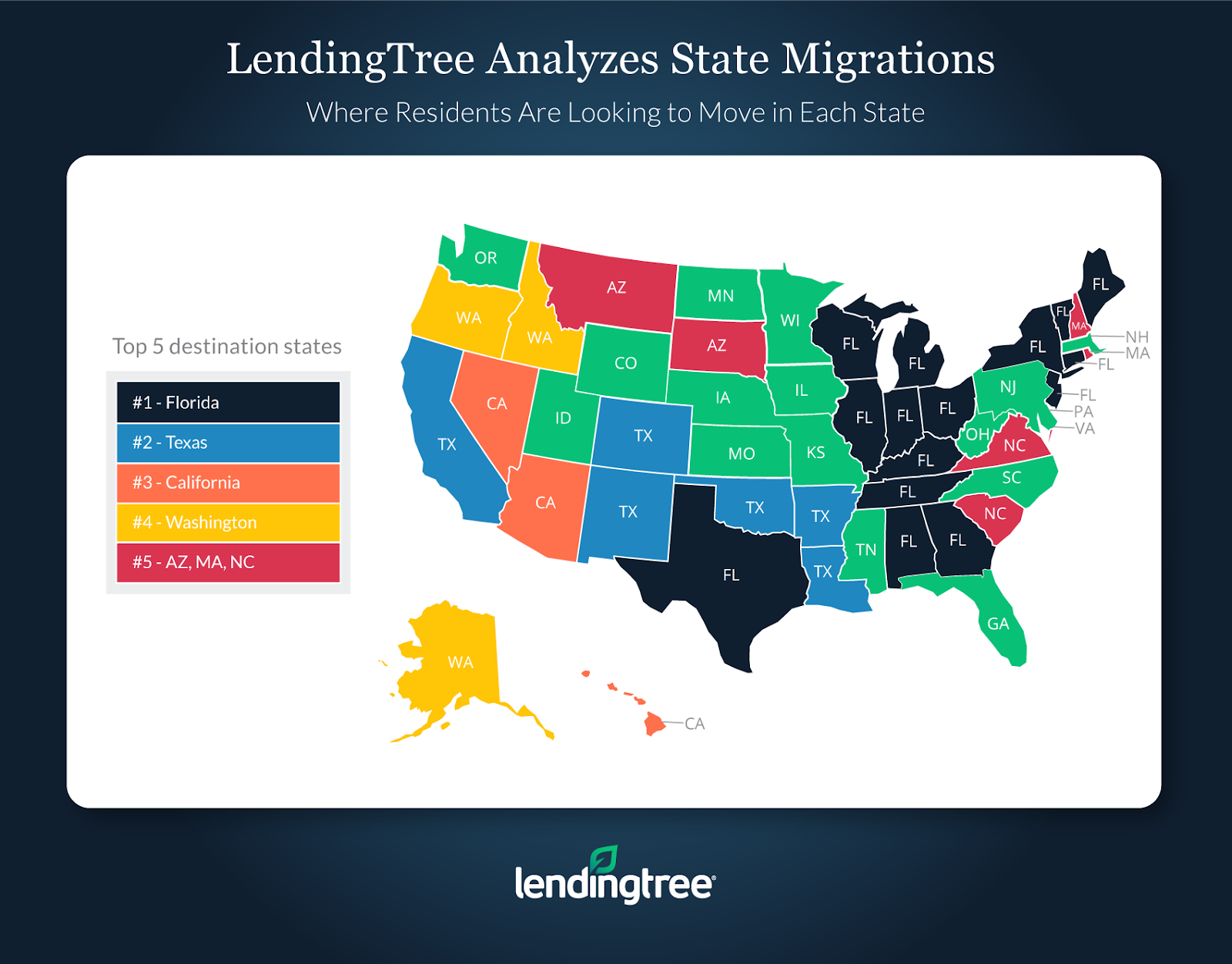 About LendingTree
LendingTree (NASDAQ: TREE) is the nation's leading online marketplace that connects consumers with the choices they need to be confident in their financial decisions. LendingTree empowers consumers to shop for financial services the same way they would shop for airline tickets or hotel stays, comparing multiple offers from a nationwide network of over 500 partners in one simple search, and can choose the option that best fits their financial needs. Services include mortgage loans, mortgage refinances, auto loans, personal loans, business loans, student refinances, credit cards and more. Through the My LendingTree platform, consumers receive free credit scores, credit monitoring and recommendations to improve credit health. My LendingTree proactively compares consumers' credit accounts against offers on our network, and notifies consumers when there is an opportunity to save money. In short, LendingTree's purpose is to help simplify financial decisions for life's meaningful moments through choice, education and support. LendingTree, LLC is a subsidiary of LendingTree, Inc. For more information, go to www.lendingtree.com, dial 800-555-TREE, like our Facebook page and/or follow us on Twitter @LendingTree.