Buying a Car with a Salvage Title

Buying a car with a salvage title might seem like the answer to your cheap-car dreams but you could be in for a rude awakening if you aren’t careful.  “Salvage” is a designation your state uses to brand a vehicle’s title and it typically means the car was damaged beyond what is financially feasible to fix. So while the sales price of a salvage car may be 10% below market value, you may pay well over that to fix the car.

The exception to this is that a car could also be considered salvage because it was stolen and not recovered within a window of time (usually 30 days). In this case, the insurance company already deemed the car a total loss and paid the owners what the car was worth before it was found. This type of car may be called a theft recovery salvage.

What does this mean for you? Another person’s loss is not necessarily your gain. Insurance companies typically calculate a salvage car as being worth as much as 80% less than cars without a salvage title. And for damaged vehicles, paying for repairs could wipe out any potential savings. You might be literally buying someone else’s problem.

Are there other types of titles? Yes, a “normal” title is called a clear or “clean” title, meaning the car has no reported or recorded major damage. Some states differentiate salvage titles by listing the specific reason, such as irreparable, lemon, hail, junk and water damage. Not every state does this. The American Association of Motor Vehicle Administrators provides state-by-state instructions for obtaining a vehicle record here.

Is it possible to rebrand a salvage title? You may see cars advertised for sale with rebuilt or reconstructed titles. The advertisement may even say the title is now “clean.” A state motor vehicle title agency may replace the salvage title with a rebuilt or reconstructed one once it’s been repaired to its satisfaction, but it still means the car was formerly branded as salvage. It’s a necessary step, however, in order to make the car legally street worthy — we’ll talk about the exact steps in a minute.

The cons of buying a salvage title car 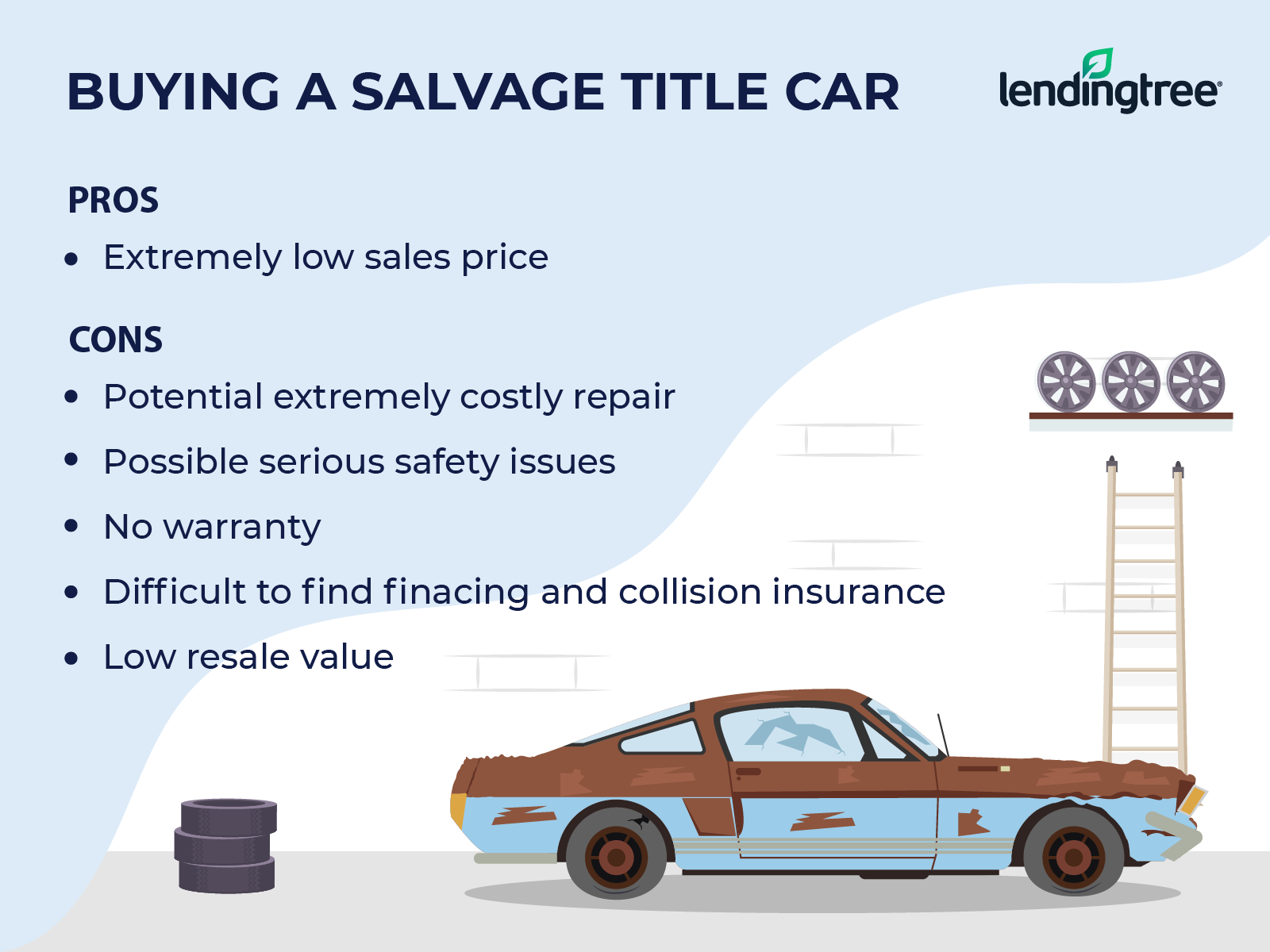 Salvage title cars may not be road ready.

When a dealer advertises salvage cars for sale — and many do — you may think the cars are in good working order. This is not necessarily true. The whole reason the car was salvaged in the first place is because repairing it was more expensive than replacing it, according to the insurance company. Ergo, it is not safe to assume the car was fully and correctly repaired with parts that are going to last.

Salvage title cars may not be safe.

If repairs aren’t up to snuff as we mentioned earlier, you may not find out until it’s too late.  Airbag repairs, for example, are relatively easy to fake, but you might not know there’s a problem until there’s an accident.

You may have to pay a lot to make a salvage title car useable.

There are cases when even a professional mechanic, who can do the work herself, ends up paying thousands more in repairs than what she paid for the car. The cost of a salvage car isn’t just the price you pay to buy it, but the price of everything you would need to fix and maintain it.

Salvage cars don’t have a warranty.

A vehicle losses its warranty coverage when it is salvaged. And most salvage cars are sold “as is,” meaning the seller is not providing any type of guarantee, either. So if the engine falls out a day after you buy it, it’s your problem.

You may not be able to find collision insurance.

Because the damage makes a salvage car’s value hard to calculate, insurance companies aren’t too eager to sign up to pay for the car if it gets damaged once more. It is hard to find full coverage or collision insurance for salvaged cars. But, depending on your driving record, you will probably be able to find liability insurance to meet your state’s legal minimum requirement for being on the road.

You may have a hard time finding a loan.

There are few lenders willing to provide a salvage title auto loan. Westlake Financial is one of them, but most lenders will not. This is largely because it’s almost impossible to get collision insurance for a salvage car — in other words, the lender probably won’t get its money back if the car gets into a crash. To buy a salvage car, you would probably have to pay for it in cash, or take out a personal loan, which tend to have higher interest rates than auto loans.

Just as you wouldn’t pay a whole lot to buy the salvage car now, someone else would probably pay even less to buy it from you later; the car will not only have a spotty past, it will also be older, with more miles.

You may have to jump through hoops for registration.

In order to legally drive a salvage car, you need to register it and different states have different requirements. Some states require that a mechanic or police officer, or both, inspect the vehicle. Some states may require that you be a licensed rebuilder to even buy a salvage vehicle in the first place.

The pros of buying a salvage title car

A salvage title car may be the right answer in certain situations.

If you can use the salvage vehicle for parts

You might be able to use a salvage vehicle as a parts donor for another compatible vehicle. This could save you money over buying parts one by one online or time hunting for parts at a junkyard. The trick to this is to make sure the parts you want off the salvage vehicle are not the parts that could have been damaged. For example, if you need engine parts and the car was salvaged because of an accident, make sure the accident was a side- or rear-impact collision that didn’t damage the engine.

If you can’t get an auto loan

If you can’t find a traditional auto loan, a personal loan isn’t an option and you don’t have a lot of cash, a salvage title car might be an option. If you plan to use it as your main transportation, be careful and check that the car will meet your needs by following our steps below.

How to buy a salvage title car

If you are buying a salvage car to use for transportation, rather than for parts, please be careful. If you’re buying the salvage title car off Craigslist — or even a dealer — you may find this guide useful.

Look for aesthetic damage only.

A car can be declared a total because of aesthetic issues such as hail damage — few people want to drive a car that looks like it has inverted pimples. However, if that is the only reason the car has a salvage title and the engine, suspension, frame, brakes and safety systems are unaffected, then you’ve found a gem in the rough.

Talk with the seller.

Ask why the car was totalled: hailstorm, flood, accident? If it’s the latter, what type of accident? Ask when it was totalled and for a photo of the title. If the seller is a dealership, check it out on the Better Business Bureau to see if any complaints have been lodged against it.

Warning: Some sellers do what’s called “title washing.” For example, if a car is water damaged, the seller may title it in another state where flooding isn’t common and the state doesn’t specifically mark the salvage title as water damage. This way the buyer isn’t aware of the reason for the salvage title and buys it without knowing the extent of the damage.

The vehicle identification number (VIN) is important because it can tell you a lot about the car. You can run it through a few sites to verify that what the seller told you is true.

You can find the car’s VIN on the:

Inspect the car yourself.

Pay attention to your senses. Does what you observe match what the seller told you? For example, if the car was supposedly totalled in a rear-end accident but you see an engine oil leak and notice the hood was replaced, it might have actually been in a front-end accident and the engine is damaged. If you smell mold, the car might have had major water damage.

Check with your state’s department of motor vehicles (DMV).

It is smart to do this before you buy the vehicle because you don’t want to find out after you buy it that you can’t legally drive it. When you talk to them, make sure you’ll be able to legally register and drive the car and find out what you’ll need to do to make that happen. Your state’s DMVs may require paperwork showing that a car has been repaired and perhaps charge a fee.

Have a mechanic inspect the car.

If the car passes your inspection, get a professional mechanic to look it over. In many states, you would need to do this any way to register the car. When you do it ahead of time before you buy it, you could avoid an unsafe car. If it passes all checks and safety inspections, and you feel comfortable, you might buy the vehicle.

Exchange money and the title.

If you are buying from a private seller, have the owner sign over the title before you hand over the money to pay for the car while you are in a safe place, such as a bank or in the DMV office. Follow through with your state’s process to register the car, which may involve a DMV inspection, and you should be good to go.

What to do if you unknowingly bought a salvage title car

If you bought a salvage title car without knowing it, only discovering this fact after the contract has been signed or money exchanged hands, keep every piece of paperwork you have, including any documentation from where you communicated with the seller, such as emails or texts. Then, you could contact the consumer protection office in your state. It might be able to help you return the car for a full refund. Or, you could look for a lawyer through the National Association of Consumer Advocates.

The bottom line on buying a salvage title car

Buying a functional, dependable salvage title car requires that you do your research. If you are set on one, be careful: a salvage title history is forever. A car can be repaired but can’t go back to being fully undamaged. Limit the risks you take by researching the car and getting a mechanic to check it out before you buy.