An electric vehicle is more expensive to buy than a conventional gasoline-powered car, but an EV could make up for that initial investment in low maintenance costs. You might spend half in electric car maintenance costs versus gas, especially when you factor in the price of fuel, over the course of 100,000 miles. Maintenance costs for EVs are significantly cheaper than nonelectric cars, simply because there’s less that can go wrong. Americans spend an average $774 a year on new car ownership, which is the highest it’s ever been. Reducing maintenance costs could reduce overall costs.

EVs are relatively simple, in the best way. You don’t have to do oil changes, period. The brakes don’t need replacing nearly as often due to regenerative braking. There are no spark plugs and no transmission. Here’s an example of a typical maintenance schedule for a Tesla Model 3:

Compare the Model 3’s schedule versus that of a conventional gasoline-powered vehicle. Let’s take a look at the Ford Focus: 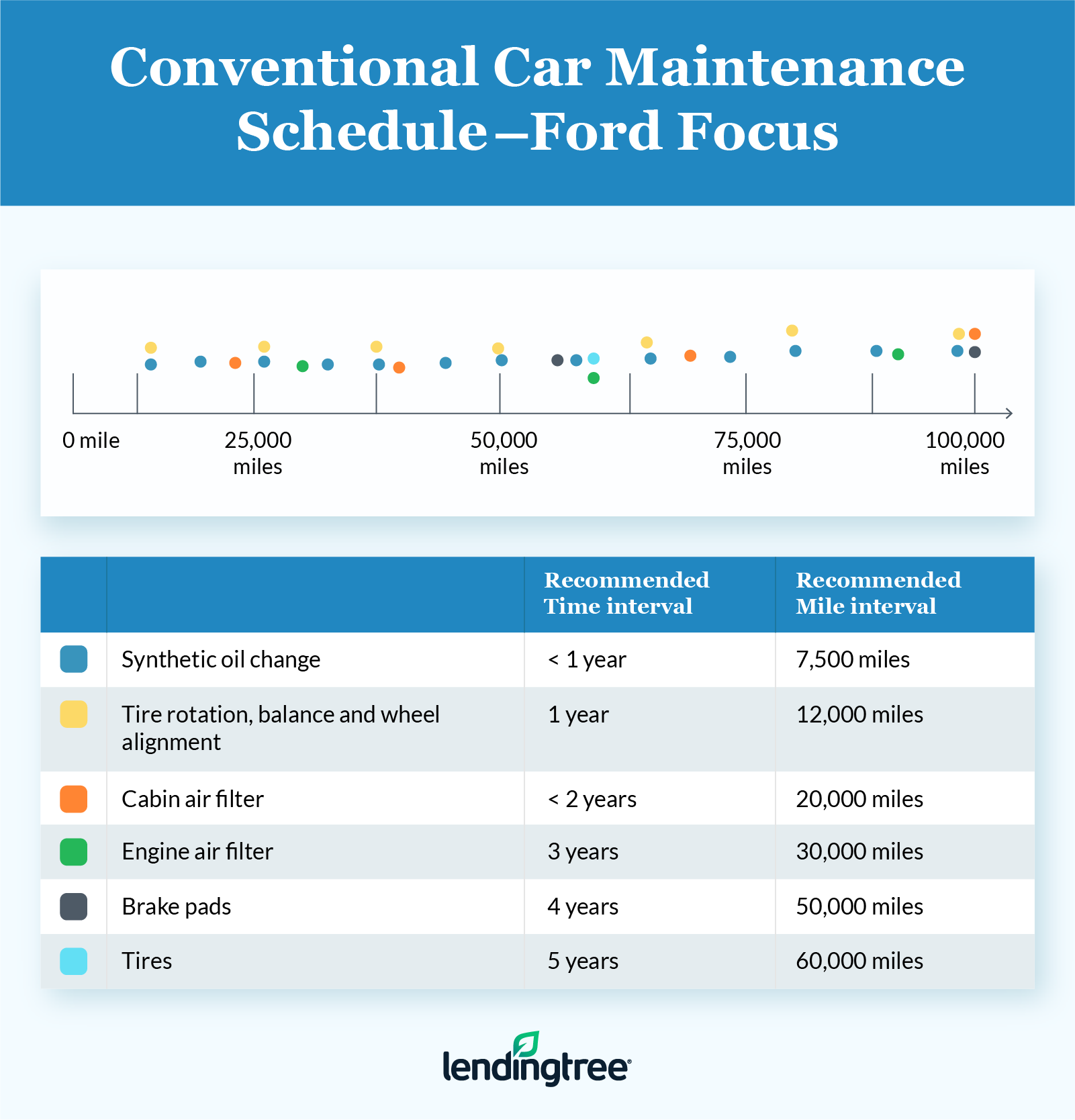 Gasoline-powered engines, as common as they are, are complicated pieces of equipment,  creating and controlling miniature explosions: igniting the fuel and using the force of the combustion to move. They have hundreds, sometimes thousands of moving parts that all have to dance together in rhythm in order for everything to work.

And all those parts need tending. Two of the most commonly discussed and expensive parts when it comes to the electric versus gasoline debate are the battery in an EV and an engine in a conventional car.

We’re not talking about that one battery in your gasoline- or diesel-powered car, weighing about 40 pounds and is available at your neighborhood auto parts store. We’re talking about the nearly half-ton pack of batteries that stores the energy necessary to power the motor. These batteries are charged by plugging the vehicle into an electric power source.

Like an engine, EV batteries are designed to last and usually come with extensive manufacturer warranties that can last 8 years or 100,000 miles, longer than many engine warranties.

They can be expensive to fix or replace. A replacement battery for a Chevrolet Bolt is for sale for around $13,000. The cost for a Tesla Model 3 replacement battery module is predicted to be $5,000 to $7,000 (there are four modules in pack, one pack per car) in 10 years, around the time they may wear out.

Replacing an engine in an internal combustion vehicle is also a major expense, but less costly than a new EV battery pack. Like electric car batteries, most automakers provide a warranty on their engines: A powertrain warranty typically lasts at least 5 years or 60,000 miles, though some manufacturers may offer 10 years or 100,000 miles.  A new engine can cost a few thousand dollars. A Ford Focus 2.0 DOHC 2000 engine currently costs about $2,500, not including labor to remove the old one and install the new engine.

Maintenance costs for both EVs and gas-powered cars

For both types of vehicles, you will also eventually have to replace more parts, such as brake calipers, which usually wear out much later than 100,000 miles. This type of maintenance is typically more expensive than, say, replacing wiper blades as many people prefer to have a qualified technician make the replacements.

It can cost half the price to charge an EV for a 200-mile trip rather than pay for 200 miles’ worth of gas.

No matter which state you live in, electricity is cheaper than gasoline. The U.S. average for one kilowatt hour of residential electricity in September 2019 was 13.17 cents. The highest state average was Hawaii at 31.17 cents. Compare that with the average national gas price as of Dec. 11, 2019 of $2.57 for regular unleaded.

Is it cheaper to own an electric car?

Maintenance costs for EVs are significantly less expensive than those for conventional vehicles, which may cut down on your overall cost of ownership. But when you factor in an EV’s price tag, a small sedan or hybrid car, may come out cheaper in the long run.

The average transaction price of an EV is $54,626 compared with the overall average of $38,393 for all types of vehicles — cars, trucks and SUVs — according to Kelley Blue Book. But it’s possible to buy an electric vehicle for much less. And despite the fact that federal tax credits began to phase out in 2019, it is still available on certain models until April 1, 2020. That’s in addition to state tax credits or incentives that may be offered by your local utility. All of these, plus your own driving habits and preferences will make a big difference in what an EV or any car costs over its lifetime. You could compare several vehicles, electric and conventional, side by side, using this government calculator to help make your decision.