The Mazda Miata convertible has been a 30-year favorite of those who like to zip around corners whether they’re going to work or running in autocross. Technically known as the MX-5 Miata, this is one small car, so small it doesn’t have a glove box, but its size means it’s made to zoom. 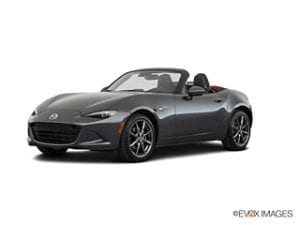 What’s next? Once you pick out the car you want, a car loan is usually next. Car dealers may raise customer APRs, so apply for financing outside of the dealership so you have a better picture of the rate you deserve. Potential lenders could include Mazda financing, your bank, credit union or online lender. You could also fill out an online form at LendingTree, and based on your creditworthiness possibly be matched with up to five different loan offers from lenders.

It doesn’t hurt your credit to apply to multiple lenders any more than it does to apply to one if you do all your applications within the rate shopping period of generally 14 days — and some credit scoring methods may even allow you up to 45 days.

It is hard to find safety ratings on convertibles. The Insurance Institute for Highway Safety website lists only one: the Mustang convertible. A recent National Highway Traffic Safety Administration (NHTSA) study did not mention convertibles specifically but found that smaller cars had higher fatality rates — vans had the lowest. In other words, a convertible may not be as safe as, say, a minivan. NHTSA does not rate the 2019 Mazda MX-5. The Miata does have standard airbags, safety seat belts and knee airbags.

For active safety features, Mazda features the i-Activsense package. The Club trim may include the following in that package:

The Grand Touring Miata may include these advanced active safety features:

The Miata soft top has three trims and the hard top has the top two out of the three: Club and Grand Touring.

The Miata is not a muscle car. It won’t rip down the open road like a Mustang or Camaro. It will, however, take turns that would leave the Mustang and Camaro spinning out.

*Chart data is for base 2019 models. Expert score averages Kelley Blue Book (KBB) and Edmunds expert ratings. Standard technology refers to features included in the lowest trim level for each model at no extra cost (not an exhaustive list). Fuel economy is combined city / highway mileage as defined by the EPA.

Redesigned for 2019, the Mazda Miata has extracted more horsepower from its four-cylinder engine but still lacks the roar and open-road power of a muscle car. But you’ll like it for the price when compared with luxury roadsters or coupes. Taller drivers may want to keep cruising — the Miata could feel tiny.