Editorial Note: The content of this article is based on the author’s opinions and recommendations alone. It may not have been previewed, commissioned or otherwise endorsed by any of our network partners. This site may be compensated through a credit card partnership.

A new year welcomes new motivations, and those looking to improve their financial health in 2021 may have included boosting their credit score among their goals.

A recent MagnifyMoney survey found that 53% of Americans who set a financial resolution in 2020 achieved it, with another 36% making progress toward their goal.

Based on those successes, LendingTree researchers used an anonymized sample of more than 40,000 My LendingTree users to see where average credit scores rose the most from late 2019 to late 2020 among the 50 largest U.S. metros. Here’s what we discovered, to give a glimpse at what could happen in 2021. 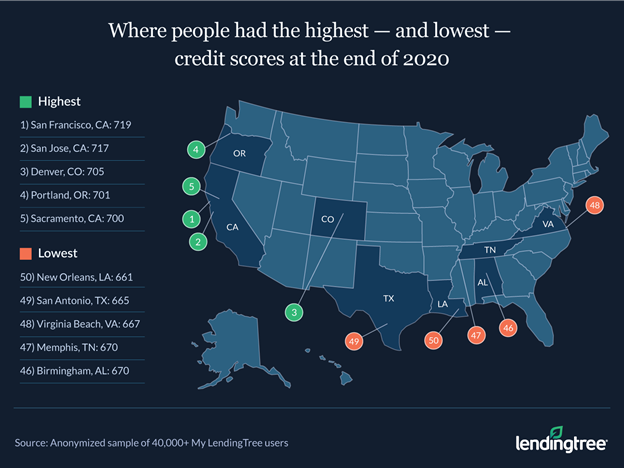 LendingTree chief credit analyst on credit scores: ‘It comes down to doing 3 things over and over for years’

According to Matt Schulz, LendingTree’s chief credit analyst, the main thing people need to know about credit scores is that they’re not as complicated as some may think.

“It comes down to doing three things over and over for years,” he said.

Those three things are:

If you do those three things repeatedly, your credit is going to be just fine, said Schulz. But there were a few other important things he wanted consumers to know about credit:

Schulz was surprised to find San Antonio and New Orleans among the top metros with the most improved credit scores.

“On one hand, those cities have some of the lowest credit scores in America, so there was clearly room to grow,” Schulz said. “However, those are also two cities where tourism and hospitality are at the heart of the economy. Nationwide, those industries have been devastated by the pandemic.”

Both metros have higher-than-average unemployment rates because of the pandemic, Schulz added, and it’s likely that many families may be struggling to pay their bills. So why might there have been such an improvement in credit scores in these areas?

On the flip side, San Jose residents didn’t see their credit score change at all. San Jose, as Schulz noted, is a very different city from those that saw big increases.

It’s a high-income city, and its economy is less reliant on many of the industries that have been hit so hard by the pandemic, such as tourism. “That means that even with the continuing lockdowns in California, many San Jose residents have likely been able to weather the storm better than those in other cities,” Schulz said.

Without the economic impact payment — due to high earnings — or additional unemployment benefits, it may be that San Jose residents didn’t experience much of a change financially.

It’s not too late to make a New Year’s resolution — if that’s your thing — to improve your credit score. Schulz shared some of his top tips for 2021.

To help stay on top of your credit score during the pandemic — when financial issues may understandably arise — there are pandemic-related financial resources that are available.

For example, Equifax, Experian and TransUnion are allowing consumers to check their credit reports weekly for free through April 2022 at AnnualCreditReport.com.

“This is a big deal,” Schulz said. “More visibility into your credit reports is always a good thing.”

Paying down balances is the best way to improve your utilization, according to Schulz, but he urged consumers not to forget the other side of the equation.

3. Check your credit report for errors

Don’t let someone else’s mistake drag your score down. Be sure to check your reports from each of the three bureaus, as they can all be different and an error in one might not appear in another.

4. Pay your bills on time

“Nothing matters more than this,” Schulz urged. If you don’t pay your bills on time, it’s impossible to have good credit — simple as that, he said.

5. Cut yourself some slack

Credit is really important, but there are times when it takes a back seat to more pressing matters.

“If you’re struggling to keep the lights on or put food on the table, don’t worry about your credit,” Schulz said. “Difficult times call for difficult decisions, and if the choice is between providing for your family right now or protecting your credit for the future, choose the former every single time.”