Benét is the founder and editor-in-chief of Aviation Queen LLC, a freelance writing business.

Editorial Note: The content of this article is based on the author’s opinions and recommendations alone. It may not have been reviewed, approved or otherwise endorsed by the credit card issuer. This site may be compensated through a credit card issuer partnership.

When airline loyalty programs were first unveiled, miles were earned just based on how far you flew. Today, travelers can earn miles by also using their credit cards and spending on an airline’s partners, and have been quick to take advantage of the perks that come with elite status, which ultimately costs airlines money.

In an effort to try to combat these losses, United Airlines changed its MileagePlus® loyalty program in June 2014 from earning miles based only on distance to earning miles based on those flown along with the fare paid. The move favored business travelers who tended to spend more on higher fares or paid for access to premium cabins. The change also allowed them to maintain their elite MileagePlus status.

The lowest MileagePlus elite status is Silver, but what does that get you when competing against those with a higher status? Are the perks that come with Silver status enough to make it worth having? Here’s what you need to know about United Silver status, the entry level in United’s MileagePlus Premier program.

How to qualify for United Premier Silver status

You can qualify for United Premier Silver status in one of two ways:

What you get with United Premier Silver status

These benefits are applicable for the rest of the year in which you qualify, the entire following year and January of the year after that. For example, if you qualified for United Premier Silver status in August 2018, it’s valid from then to December 2018, all of 2019 and January 2020. While your status benefits will still be valid in January 2020, if you want to requalify for status beyond then, all status requirements must be met by the end of 2019.

What is United Premier Silver status worth?

The most valuable benefits of Premier Silver Status are free access to Economy Plus seating toward the front of the plane, a free checked bag and reduced award fees.

Economy Plus Seating. Even if you only fly United a couple of times a year, you could easily save a few hundred dollars on Economy Plus seating, depending on the length of the flight. While not everyone feels Economy Plus is a perk, it is nice to have a couple of extra inches of legroom and be closer to the front of the plane, especially if it doesn’t cost you anything extra.

But understand that there are no guarantees that Economy Plus seats will be available when checking in for your flight. Those with higher status levels get access to Economy Plus sooner than Premier Silver members, plus travelers with no status can buy those seats right up until flight time.

Those with status also have the option to buy Economy Plus seating if they don’t want to wait for a possible free seat. But if you’ve paid for a seat and a free one becomes available, you can’t get a refund.

It’s rare you’ll find a flight with no Economy Plus seats available, but you may run into situations where only middle seats are available in Economy Plus. Then the question is: a middle seat with extra legroom or a window/aisle seat with less legroom?

If you usually buy Economy Plus seats, United Premier Silver status could easily save you hundreds of dollars a year. If you wouldn’t otherwise purchase Economy Plus, having access to the seating for free because of your status won’t save you money, but it will slightly increase the comfort of your journey.

If you have the United℠ Explorer Card or the United Club℠ Infinite Card, you automatically get a free checked bag.

Reduced award fees. If you book a lot of award travel, the fees that go with it can add up. While there’s no overall award booking fee that applies to all itineraries, you will run into a lot of fees if you book last minute, make changes or cancel an award fee. As a United Premier Silver member, you generally won’t receive a fee waiver, but you will receive reduced award fees, seen below: 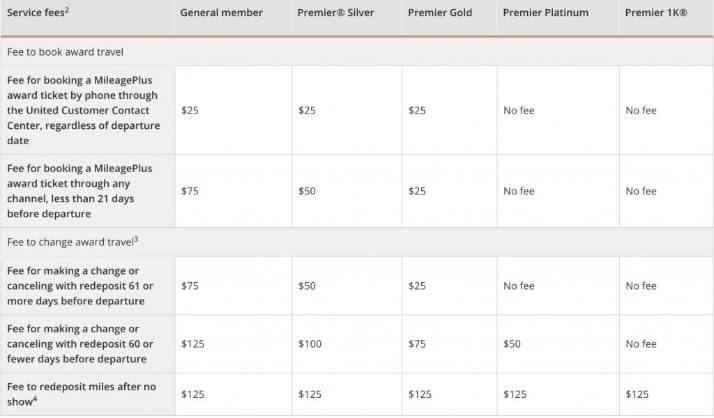 1Changes to tickets for flights within Japan (with no international connections) operated by ANA (All Nippon Airways) must be made at least four days prior to departure.

2When determining which service fees apply, the number of days before departure is calculated based upon the exact time of the scheduled flight departure.

4This fee applies to all members and is charged instead of the redeposit fee that applies if canceling before flight departure.

What about domestic first and international business class upgrades?

In short: don’t count on them. Members with 1K, Premier Platinum and Premier Gold status will always be above you on the upgrade list. The following graphic illustrates how many elite flyers — 51 total — are jockeying for 12 first-class seats on this flight to Boston. The battle for business-class upgrades is similar on international flights. 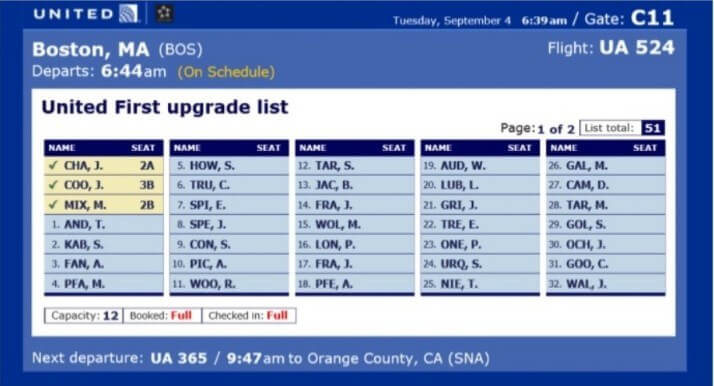 It’s highly unlikely that Premier Silver MileagePlus members received those three open first class seats. Even members with higher status have found upgrades harder to come by over the years as United tries to increase revenue by selling unbooked premium cabin seats at a discount during check-in to those who book economy tickets.

It’s definitely not worth booking extra flights to hit United Premier Silver status with the hope of getting upgrades to domestic first or international business class. But depending on your travel patterns, the other benefits of Silver status could make it worth it.

Premier Silver is United’s lowest MileagePlus elite status when it comes to perks and benefits. The odds of getting those sweet premium cabin upgrades are practically nil, since you’re competing with those with higher status and those who buy last-minute discounted United deals. You do get a discount on award booking service fees, but you’ll still pay all of them, unlike Platinum and 1K members.

But it’s not all bad news. The free checked bag on domestic flights can save you hundreds of dollars a year, depending on how much you fly on United. And there’s a solid chance of getting free upgrades to Economy Plus seats that give you extra legroom.

So when it comes to United Airlines MileagePlus Premier Silver status, something is better than nothing.