The 50 Most Expensive Towns in America

Town life is often stereotyped as simple, idyllic and inexpensive when compared with big-city life — but this doesn’t always ring true. In fact, there are quite a few instances where towns are even more expensive than the cities they’re near.

To take a look at how expensive town life can get, LendingTree, the nation’s largest online loan marketplace, ranked the 50 towns in the United States with the most expensive median home values. Our study also looks at the median income in these towns to determine how attainable homeownership is for the average person living there. What we found: The towns with the most expensive home prices are unaffordable to median income earners who live in those areas.

Ultimately, our study indicates that people who live in towns can experience the same kinds of issues related to housing affordability and wealth inequality as city dwellers. In some cases, these issues can be even more prevalent in towns than in cities. 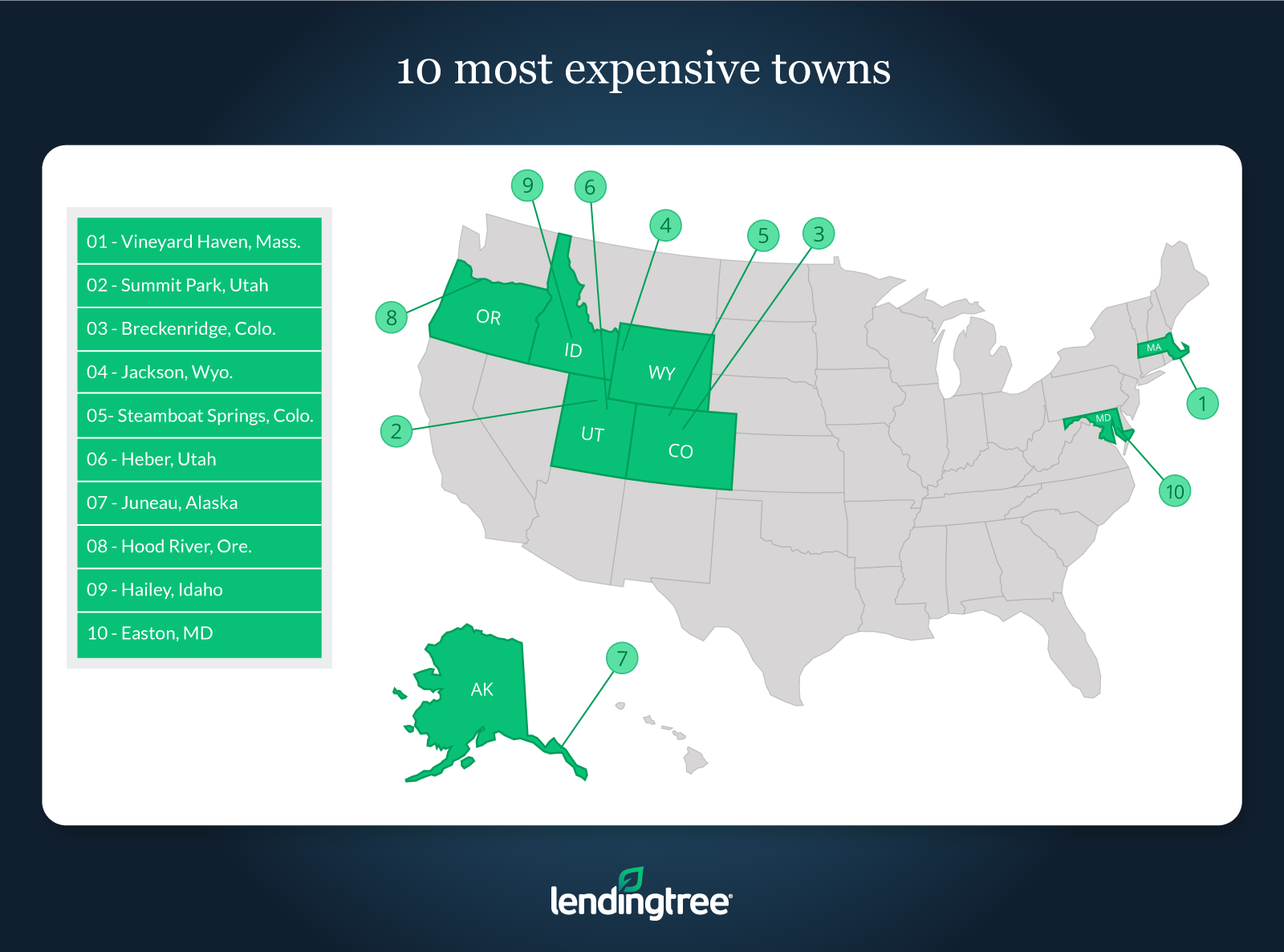 Why are some towns so expensive?

Typically, people who live in more rural areas make less money than their urban counterparts, but they are also more likely to have a lower cost of living than those in urban areas. As a result, many towns are affordable, and, in some cases, they may be more affordable and have lower rates of poverty than cities.

While it may seem counterintuitive that there would be such a large supply of homes unaffordable for the majority of people in an area, it makes some sense since because many of the most expensive towns in the country are considered “resort” or “destination” towns. In other words, they are places where large numbers of people (usually wealthy) visit during certain times of the year.

For example, the Jackson area in Wyoming and Idaho is renowned for its luxury ski resorts and proximity to Yellowstone National Park. Vineyard Haven, Mass., is located on Martha’s Vineyard, a common vacation spot for the wealthy from nearby cities like Boston or New York.

Because many people who live in these towns do not live there year-round, and otherwise make the bulk of their income elsewhere, they can afford to buy homes well outside of the price range of the average townsperson. This demand for expensive luxury homes, as well as certain building restrictions in towns like Jackson, cause home prices to skyrocket and help lead to serious income and wealth inequality.

Though home affordability may be a challenge in many towns across the country, there are certain programs that can help make buying a home a more achievable goal. For example, USDA loans can help families living in rural areas avoid making a down payment on a home and get a lower interest rate on home loans. FHA loans are another option for families who are struggling to buy a home due to an insufficient amount of cash for a down payment or a weak credit score.

While these programs likely won’t make a $600,000 home affordable to a person making $30,000 a year, they should nonetheless be able to help many families who live in the towns featured in this study.

All of the data used in this study comes from the 2017 American Community Survey 5-Year Estimates (the most recent survey which has the data necessary to perform this study). For the purposes of this study, we used micropolitan level data to approximate town level data.

When determining whether or not a home is affordable, we assume that an income earner will be able to afford a 20% down payment on the median home value in their area, and that they will receive a mortgage loan with a rate of 4.6% (the average rate offered to Americans). By using that data, we calculated the likely monthly payment and down payment for a median-priced home in a given micropolitan area.

We calculate an “affordable” monthly mortgage payment based on the “28% rule,” which says that a person should not spend more than 28% of their yearly gross salary on yearly costs related to housing. This rule, while not necessarily applicable to everyone, is useful for homebuyers to keep in mind, as it helps to ensure that they are not overspending on their home and leaving too little money for other expenses.

By subtracting the monthly housing payment that is affordable to an income earner in the geographies highlighted in our study from the calculated housing payment that would be required to purchase a home valued at the median level, we are able to determine whether or not an average townsperson can afford to purchase a home in the town that they live in.