More and more Americans are modifying their grocery shopping habits to reflect their diet—some for medical reasons, while others are simply following an emerging trend in the food industry. A grocery bill is an unavoidable expense for any household, but is it possible to stick to an average grocery budget while also following a new diet plan?

Take the gluten free diet for example. Beyond the increasing number of Americans diagnosed with celiac disease, adopting a gluten-free lifestyle has taken the U.S. by storm, ultimately shaping into a billion dollar industry within only a few years. The organic food industry is also a flourishing trend that consumers are progressively following. Eating solely certified organic foods is known to have health and environmental benefits, but it also comes with a hefty price tag.

The total cost of a grocery bill is majorly influenced by consumer shopping habits. According to the U.S. Department of Agriculture (USDA), the national average weekly grocery bill for individuals from ages 19 to 71 is $61.85. By referencing the USDA recommended balanced food plate to create a healthy grocery list and the national average for an individual food budget into consideration, we’ve uncovered how changing one’s diet to reflect a gluten free, organic, vegetarian or vegan diet can significantly affect the cost of their grocery bill. 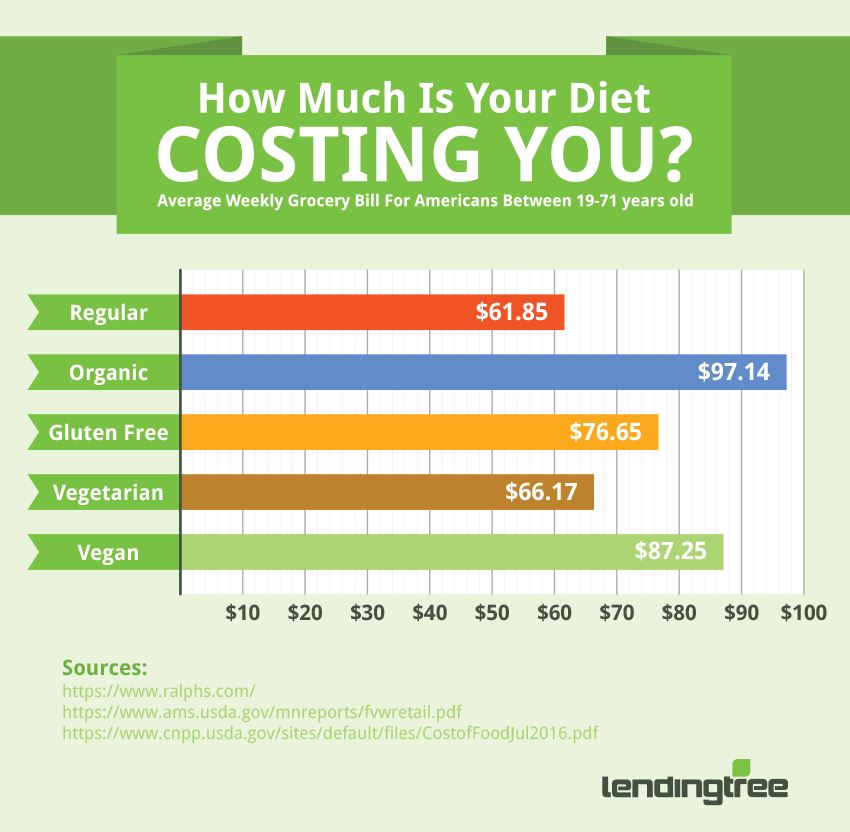 To no surprise, organic food items are consistently more expensive in each of the core food groups. There are a number of elements that factor into the price comparison of organic versus conventional food. A major reason is due to the extra care and longer growth period that organic foods require without the chemical and synthetic products that conventional products use. Although you’ll notice that the organic fruit and conventional fruit have a smaller gap than organic vegetables and conventional vegetables, these costs will vary depending on the market, shipping costs and perishability of the produce.

Gluten-free products are also notoriously more expensive due to the strict guidelines for certifying a product gluten free, the greater amount of ingredients to replace wheat and of course, less competition in the industry. Although the gluten-free market is rapidly growing, the equitable products are on average significantly lower in cost. 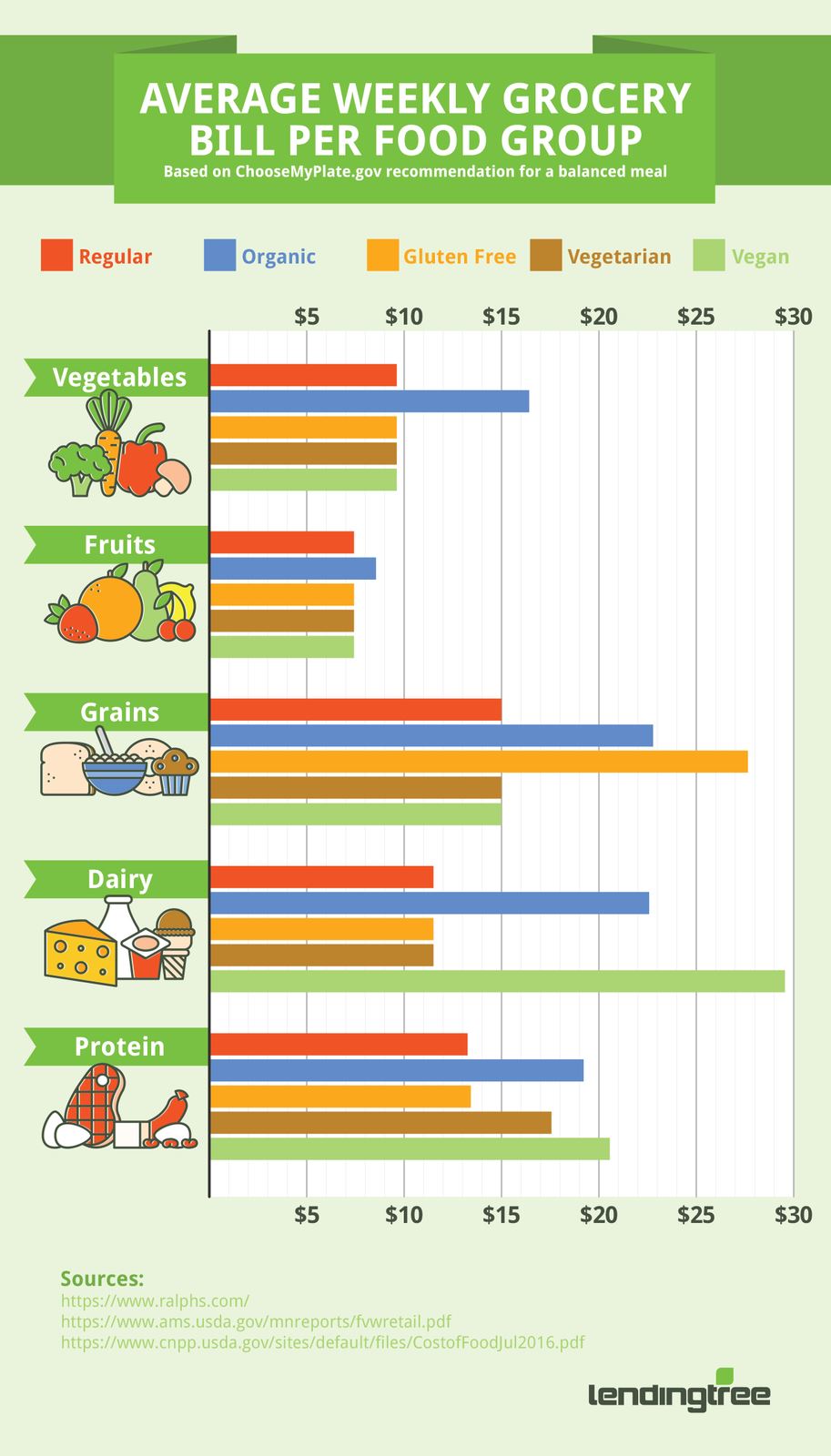 Overall, the organic and vegan diets will increase one’s grocery bill significantly. Some may argue that vegan and vegetarian diets can cost less than those who follow a regular diet, but if the consumer was to swap every product that these diets don’t allow for with a comparable food item, their grocery bill is expected to increase.

The Calculator below allows for you to compare the costs of different diets with comparable food items. While the calculator isn’t 100% accurate, it will give you an idea of how much more/less you will be spending overall if you keep your total spend in each food group the same when you switch your diet.

How much do you spend weekly on each food group?

more on groceries every week by switching from a Regular to an Organic diet.

In terms of a consumer’s day-to-day, different meals can be slightly more expensive depending on your grocery list. By breaking down the cost per serving size in breakfast, lunch and dinner, you’ll see how the prices inflate for organic, gluten free, vegetarian and vegan meals. Of course, if you were to combine diets, like organic and vegan, the price of each meal would increase significantly.

While the organic diet is definitely more expensive than any other diet, it is a point of debate whether or not it actually provides significant health benefits. A study done at the University of Stanford analyzed multiple clinical trials and past studies on this subject and found that there were little to no benefits associated with an organic diet when compared to a diet containing conventionally produced food. Some criticism has emerged since this study was completed, with critics arguing that the pesticides found in conventionally produced food could produce serious health issues, but the amount of pesticides used on most foods still has not shown signs of producing significant, adverse effects.

Gluten free diets have become very popular in the past decade, with consumers being able to find in their local grocery store a comparable gluten free option for just about any food item. This is great for the 1% of the population that suffers from celiac disease, which is an autoimmune condition that can cause extreme discomfort and pain when gluten is introduced into the body. The problem is that around 41% of U.S. adults believe that gluten free products are actually beneficial and healthy for everyone, when it has been shown that these same products contain less nutrients and more sugar, sodium, and fat than comparable food items. Still, gluten sensitivity is part of an ongoing debate and there are many who have seen positive effects from getting rid of gluten in their diet.

In the past, both vegetarian and vegan diets were also subject to much debate, but recently it has been shown that both of these diets can produce enormous health benefits. According to the American Dietetic Association – “vegetarian diets, including total vegetarian or vegan diets, are healthful, nutritionally adequate, and may provide health benefits in the prevention and treatment of certain diseases.” Vegetarians and vegans are often thinner, have lower blood pressure and cholesterol, and receive a surplus of important vitamins and minerals. People pursuing a vegan or vegetarian diet should simply be aware of the nutrients that they might be missing by excluding certain food groups and should take steps to include those nutrients, such as calcium and B-12, into their everyday meals.

While the health benefits outweigh the price for many of the non-conventional food items, the affordability is still a major factor taken into consideration when grocery shopping. While some may pay nearly $1.00 more for a pound of organic strawberries, for most, it’s not within the means of their budget. Check out the detailed comparisons below, and see where a specific diet plan may cost you more based on what you commonly purchase.