When we think of a relationship, we tend to consider obvious things: love, kids, a long life together. A topic that isn’t so obvious when it comes to your significant other but impacts your financial future? Debt.

So, who does think of debt when they consider a partner? The answer is actually more people than you may think. According to a study completed by Utah State University, couples that argue about finances once a week are more than 30 percent more likely to divorce than couples that argue about money a few times a month. The more debt and money problems there are, the harder it is to be happy in your relationship.

Finding the person to spend the rest of your life with is an amazing feeling, but what happens if your true love has amazing, outstanding debt? To learn more, we surveyed people to find out how different amounts of debt and money might affect potential romantic relationships. 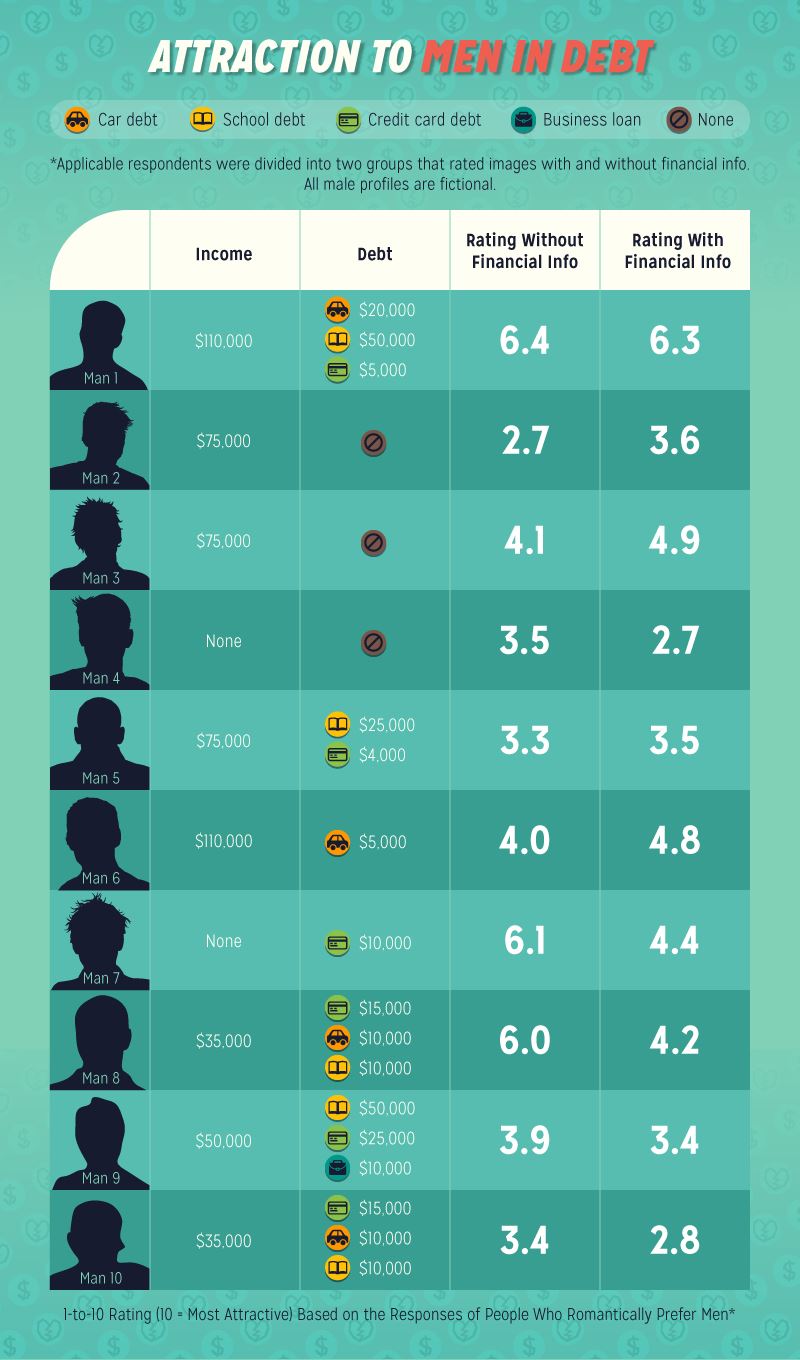 Debt can be a real deal breaker when it comes to being in a relationship. Some find it difficult to picture a future with a seemingly financially irresponsible person because romantic partnerships often involve house-buying and college-fund-planning as well as other important economic decisions. 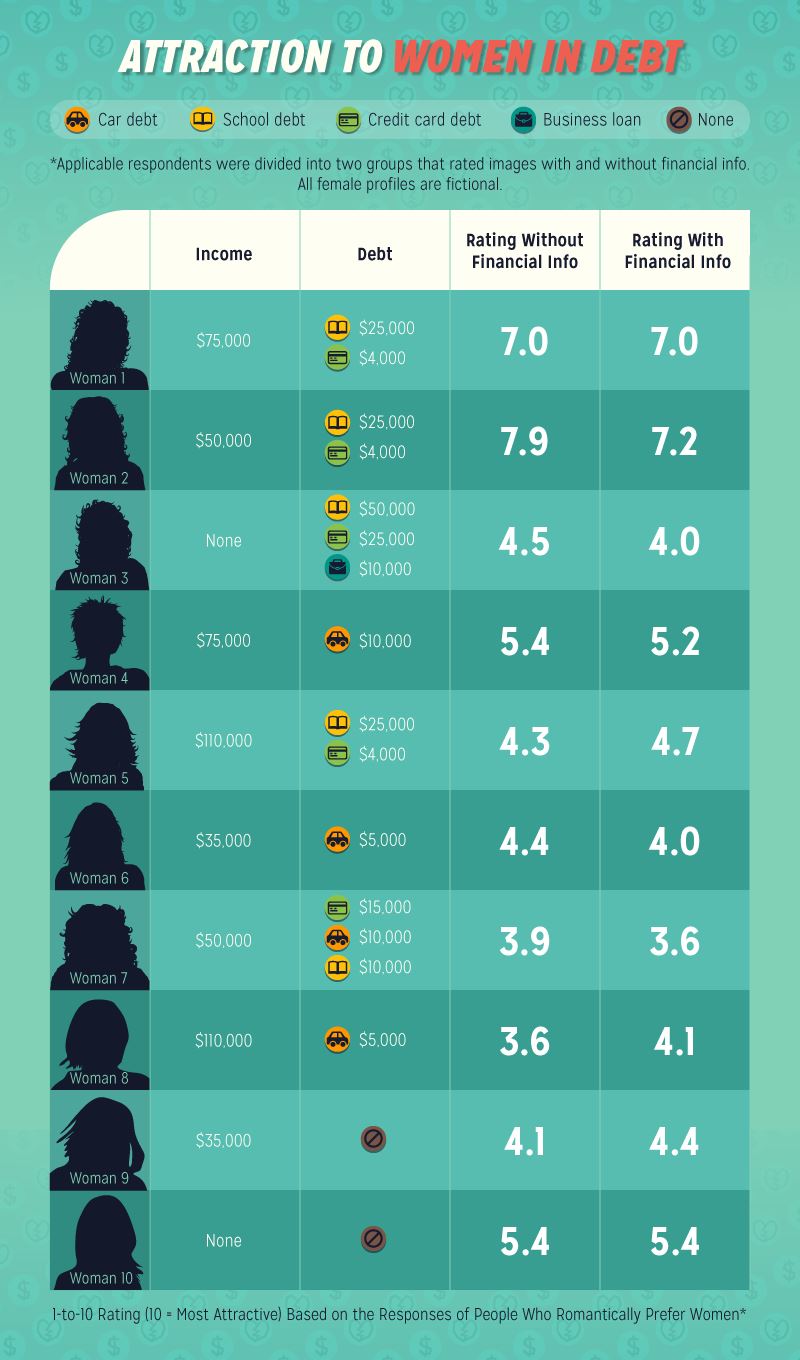 We applied the same profile analysis to a group of fictional women. In the financial situations of the women, the results are a little different than those of the men. Both men and women agree that attractiveness goes up when income is significantly higher than debt.

Based on our results, the higher the debt compared with income, the less attractive someone may seem. Survey results also showed leniency when it came to student loan debt. Of the fictional scenarios where income outweighs debt, having more school debt didn’t hurt the attractiveness of the person as much as having greater car or credit card debt.

According to TIME Money, financial obligations like home mortgages and student loans are referred to as “good” debt and “bad” debt (credit card debt would be considered bad, for instance). Trying to better yourself by going to school and racking up student loans or taking out a mortgage on a house look better than maxing out a credit card to buy a new flat-screen TV or the latest sports car on a bicycle budget. Regardless, debt is debt; unless you have a plan to take care of it, it could be the end of a relationship before it really begins.

Does Gender Play a Role in Money Making? 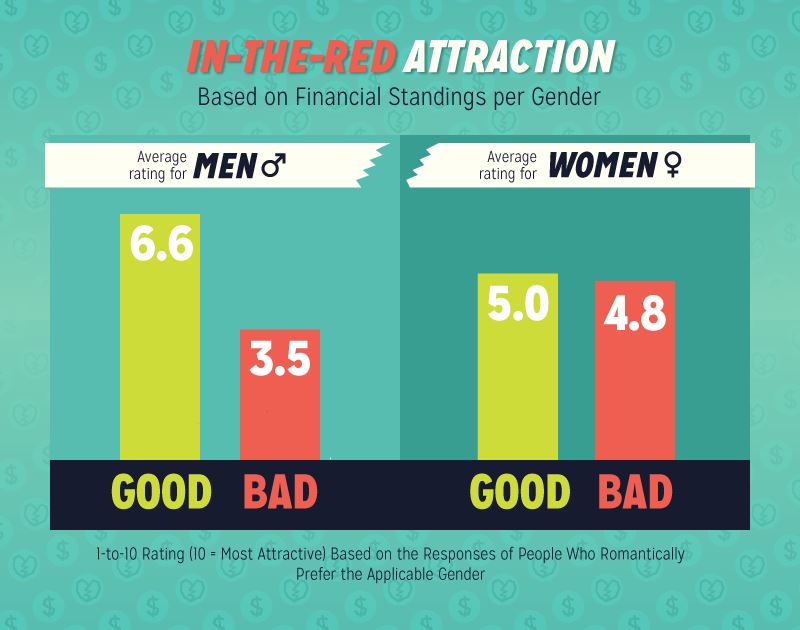 Our survey results showed a large gap between gender ratings when it came to the impact of debt on attractiveness. For the women rated in the study, there was very little difference between the average rating of the women in good financial standings versus those in bad standings. For our fictional male profiles, respondents rated a good financial standing nearly two times higher than a bad one. 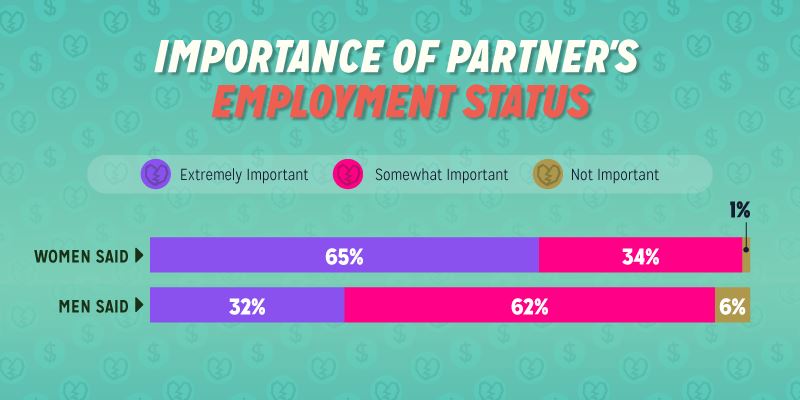 Sixty-five percent of female survey respondents said it was extremely important for their partner to work. Business News Daily came to a similar conclusion; it found that 75 percent of women said it was unlikely that they’d date a man who was unemployed.

In the same Business News Daily study, 46 percent of men said they would date someone who was unemployed. In our study, less than a third of men considered their partner being employed as “extremely important”. 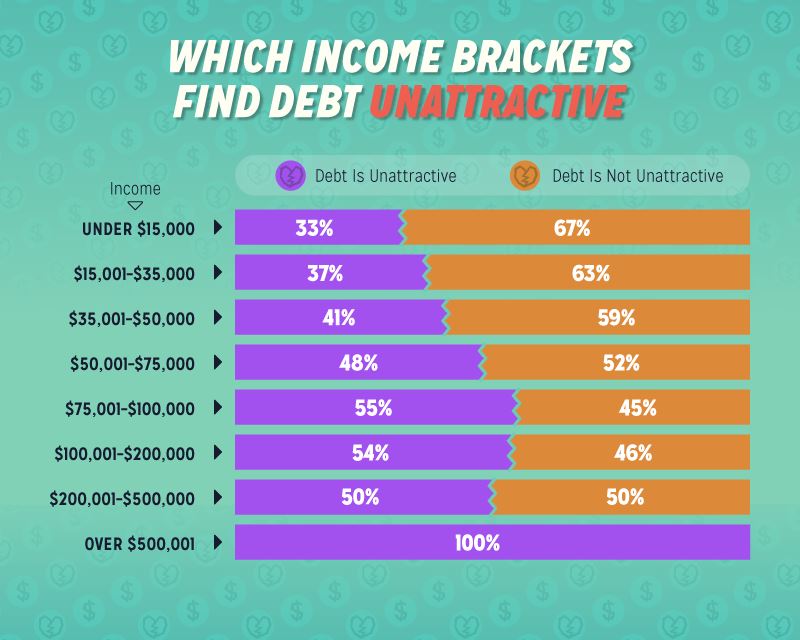 Dating and Marriage: Can Debt Affect Your Future Together? 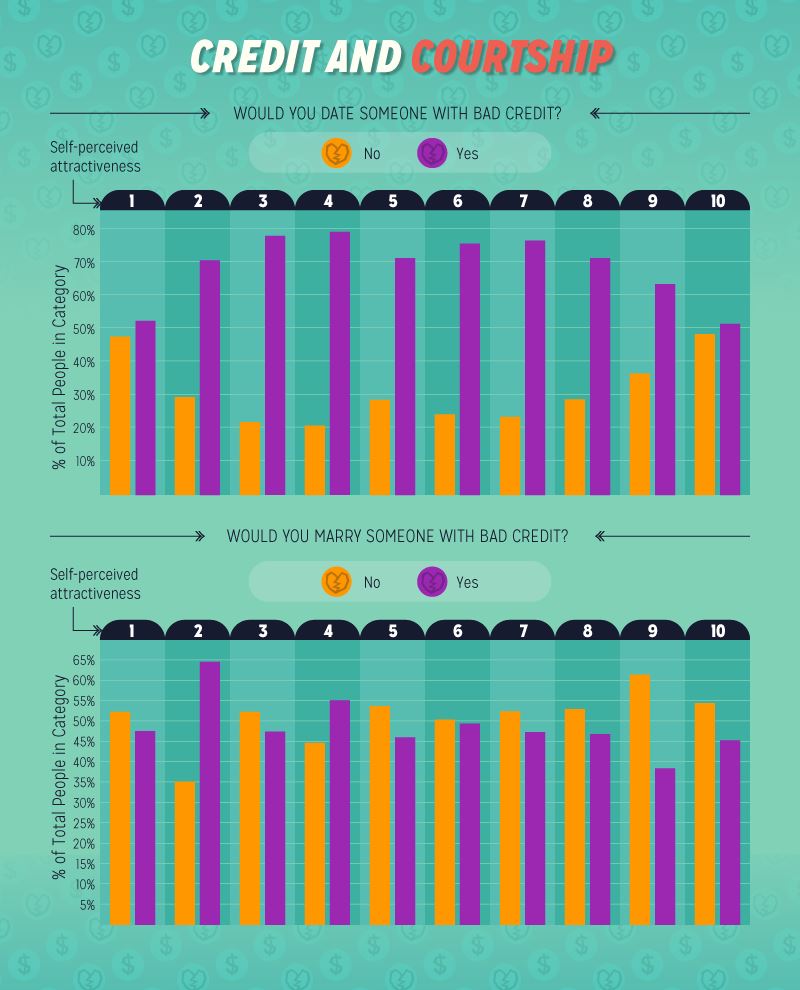 According to Forbes, if you’re considering marriage with someone, an important step is sitting down to review each other’s credit. The lesson here: don’t wait until you’re ready to get married to work on improving your credit score!

The Importance of Finances Before Dating 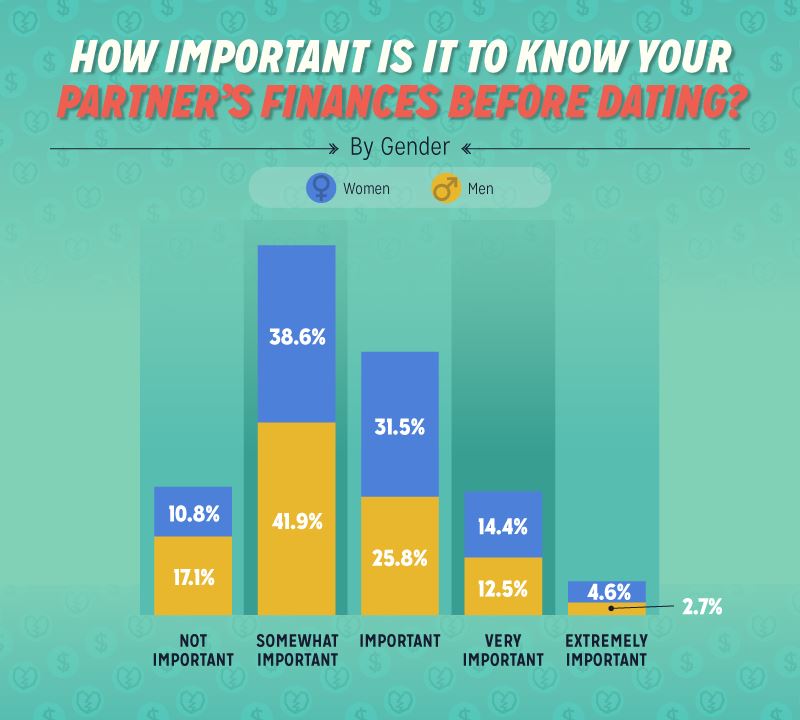 Based on our survey, most participants responded it is at least somewhat important to know about their partner’s finances before dating. 10.8 percent of female respondents and 17.1 percent of male respondents said finances weren’t important at all when getting to know someone. There were only a few who believed their partner’s finances would be something extremely important to know before dating.

According to Mental Floss, it is best to use the time early in a relationship to discuss personal finances – when you both are exceptionally happy and kind to each other, and still getting to know one another. It’s better to have the conversation early because both parties may not be so open later in the relationship.

The Importance of Finances Before Marriage 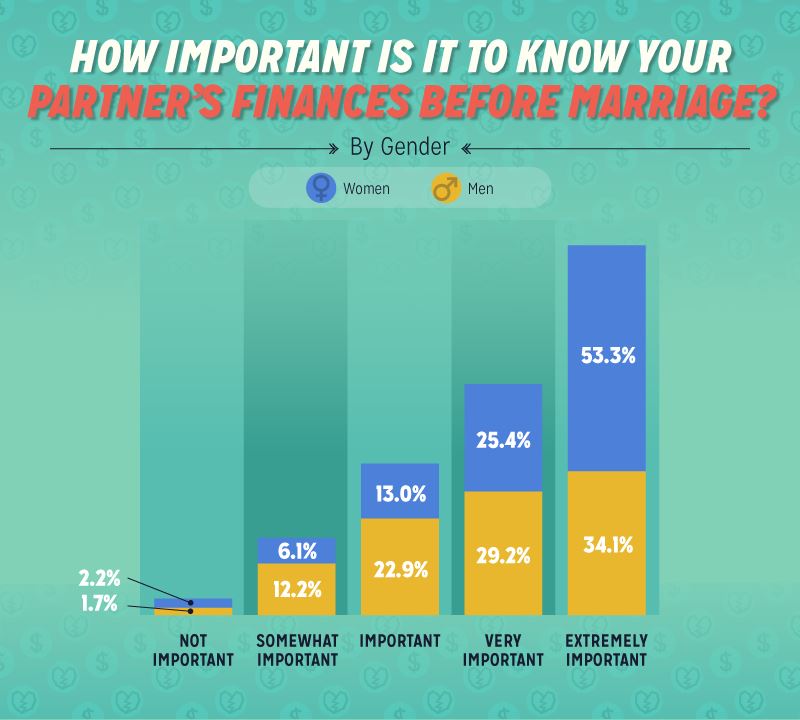 Knowing your partner’s finances before marriage seemed to matter a lot more to participants. More than half of the female respondents said it is extremely important to know their significant other’s financial situation before tying the knot. Less than 4 percent of all participants said that it is not important at all.

A recent survey conducted by Experian shows 59 percent of divorcees consider finance to be a key factor in their break-ups. Forty-seven percent didn’t even know their spouse’s credit score until after they married. Having a finance discussion prior to marriage can potentially save your relationship from ending prematurely. 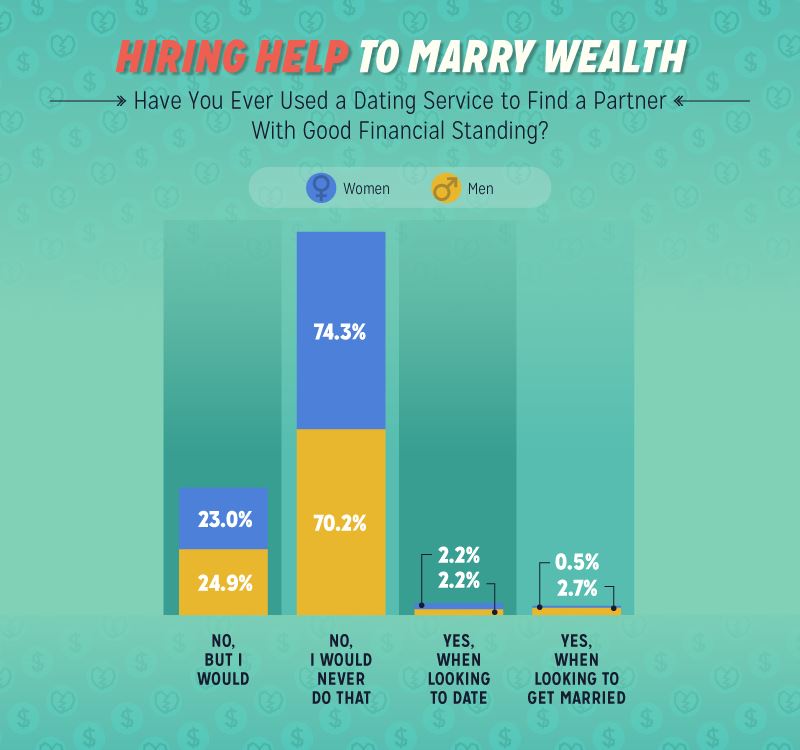 An alternative to finding a partner in the real world is to use a dating service. Though it may seem uncommon, there are dating sites set up solely for the purpose of finding a partner who is financially stable. We asked participants if they would use a dating service to find someone based on their financial standing. More than 70 percent of both male and female respondents said they would never use that type of service, but nearly a quarter of men and women said they would be willing to give it a try.

According to a survey by the Pew Research Center, only 28 percent of the general public thinks of financial stability as a very important reason to get married. Using a dating service related to financial security doesn’t seem to be a popular way to find a soul mate.

Is Checking Your Partner’s Credit Crossing the Line? 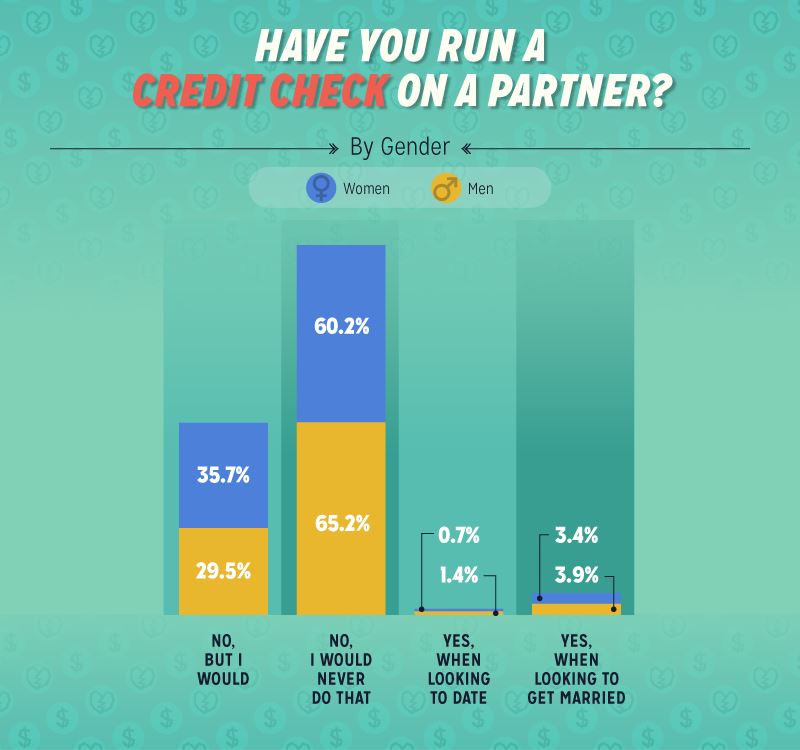 Hiding money from a significant other can be disastrous in a relationship. According to CNBC, 1 in 6 newlyweds admit they are hiding a financial account from their partner. Finding out a spouse is hiding money from you can be upsetting, but it may be more upsetting to find out your spouse ran a credit check on you without your permission.

Mixing love-and-money can be tricky, but with the right person (or by yourself) it’s always possible to get ahead of debt. A steady income and carefully managed finances can put you ahead of the debt curve. Some people suggest resolving debts before getting married, but we all know love doesn’t always wait. It is possible to be in love and in debt if you’re investing in both.

If you or your partner are struggling to get out of debt or need help managing your finances, visit LendingTree.com or call 800-813-4620.

This study consisted of two sets of surveys. First, we surveyed 2,000 Americans about their opinions on debt and personal relationships. There were two different versions of the survey: version one, in which people were shown generic headshots of men or women, and asked to rate them on looks alone; and version two, a second profile in which participants were asked to rate the same images with fictional finance information attached (e.g., debt and income). By comparing the ratings of each hypothetical person, we could visualize the differences in ratings when financial information was factored into the equation. The second survey was given to 1,008 Americans and focused specifically on their opinions of credit score and its effect on attractiveness. The first six graphics were created from the first set of surveys of 2,000 people, while the final four sections are based from the second survey of 1,008 people.