One of the top concerns among college students today is money. In fact, Americans owe around $1.2 trillion in student loan debt, which is spread among about 40 million borrowers. What’s even more frightening is the fact that close to 65 percent of students misunderstand the terms of their student loans.

The cost of tuition and fees has substantially increased over the past 20 years for public and private schools alike. But colleges nationwide receive large sums of money in the form of donations or gifts to invest in their institutions – otherwise known as endowments.

Where does this money go? To see how these funds are spent and how they impact students, we looked at the universities with the largest endowments. 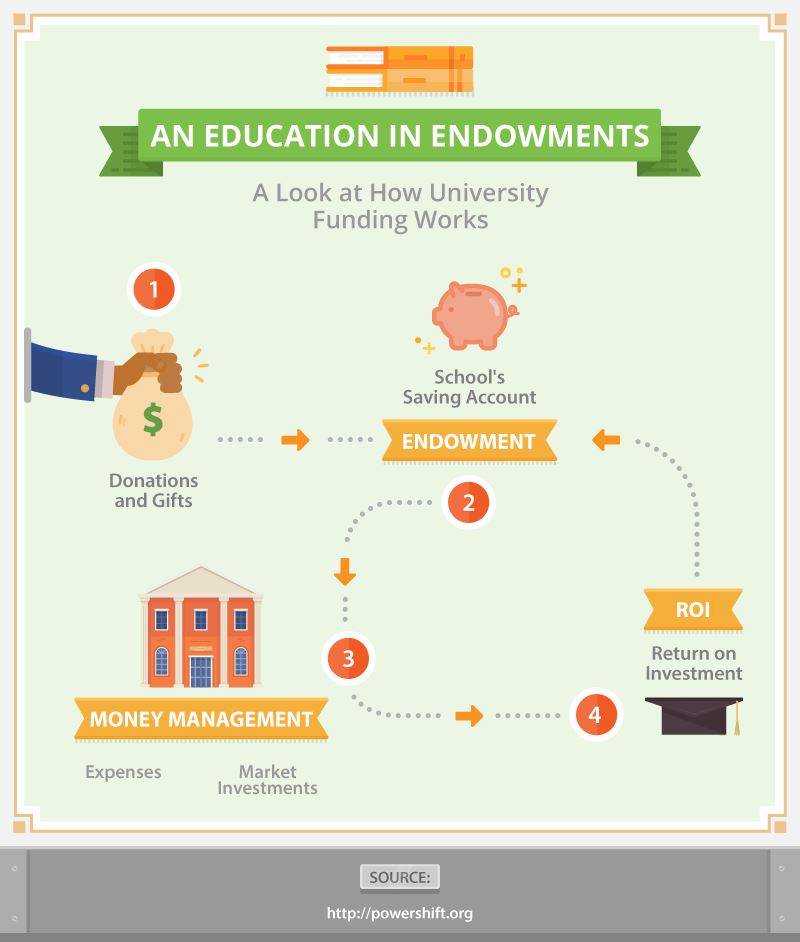 What is an endowment, and how does a university spend it? Simply put, endowments represent cash or other financial assets that are donated to universities or colleges. The allocation of these funds is a somewhat controversial topic; while some people may think that the money should be used exclusively for additional campus resource investments, that’s not always the case.

To make the concept clear for all, we created a step-by-step explanation on how the endowment process works. First and foremost, it all begins with an outside donor – possibly an alumnus or community member – who contributes a certain value to the university. That value is then stored in the school’s savings account and is spent in several ways. Most of the funds are apportioned to a variety of asset classes, while the rest goes toward paying off expenses, increasing faculty salaries, and lowering tuition fees. Typically, endowment managers only allow approximately 5 percent of the overall fund to be spent. The money earned from returns on investments (ROI) is deposited back into the school’s savings account; this maintains a flow of money. 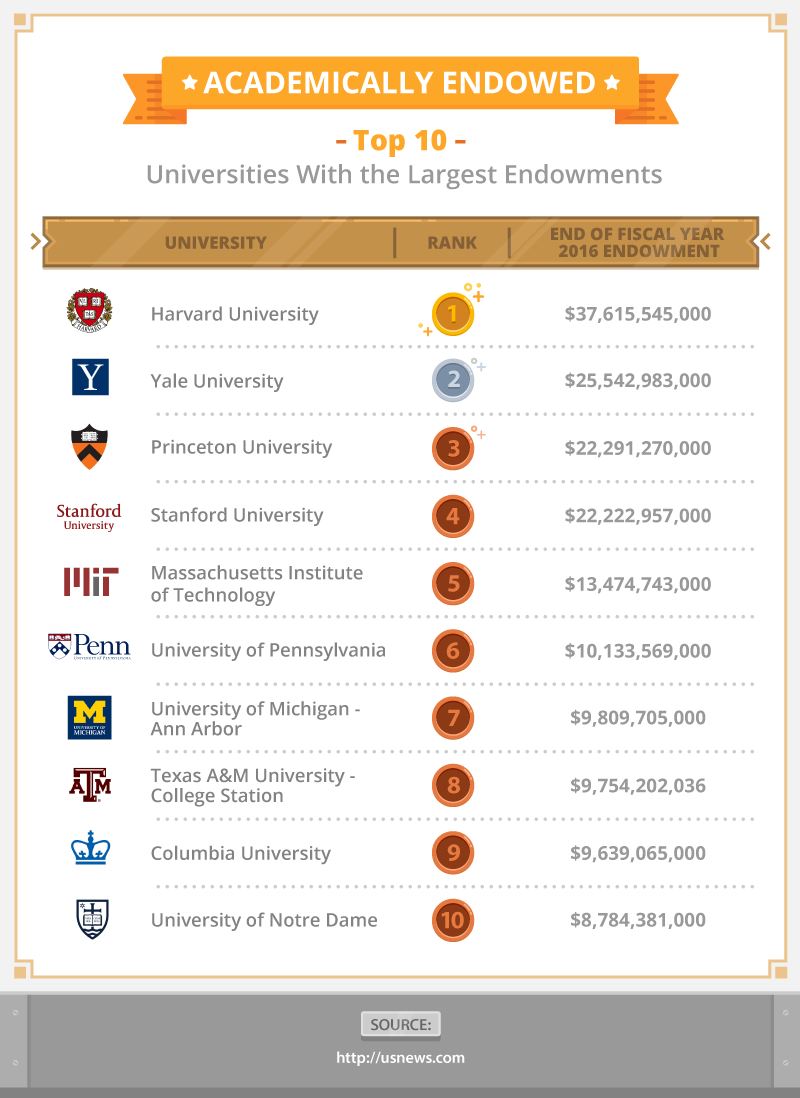 Not every school has an endowment, and a good portion of colleges receiving large donations appear to be top-tier universities that place a strong emphasis on research. Among the top 10 universities with the largest endowments, the average endowment was $16.9 billion at the end of the fiscal year 2015.

Harvard University ranks at the top of the list with a $37.6 billion endowment. Harvard is no stranger to the tops of lists; it was rated the second best national university in the United States as well as the richest. The university’s endowment is managed by a group of in-house experts who invest the funds that allow Harvard to collect additional cash.

Yale university has an endowment of $25.5 billion, which is used to fund various facilities around campus, such as the Sterling Memorial Library and its prominent law school. Rounding out the top three is Princeton University with a $22.2 billion endowment. Unlike its competitors, Princeton’s endowment funds approximately 80 percent of the university’s scholarships in addition to various student fees and athletic programs. 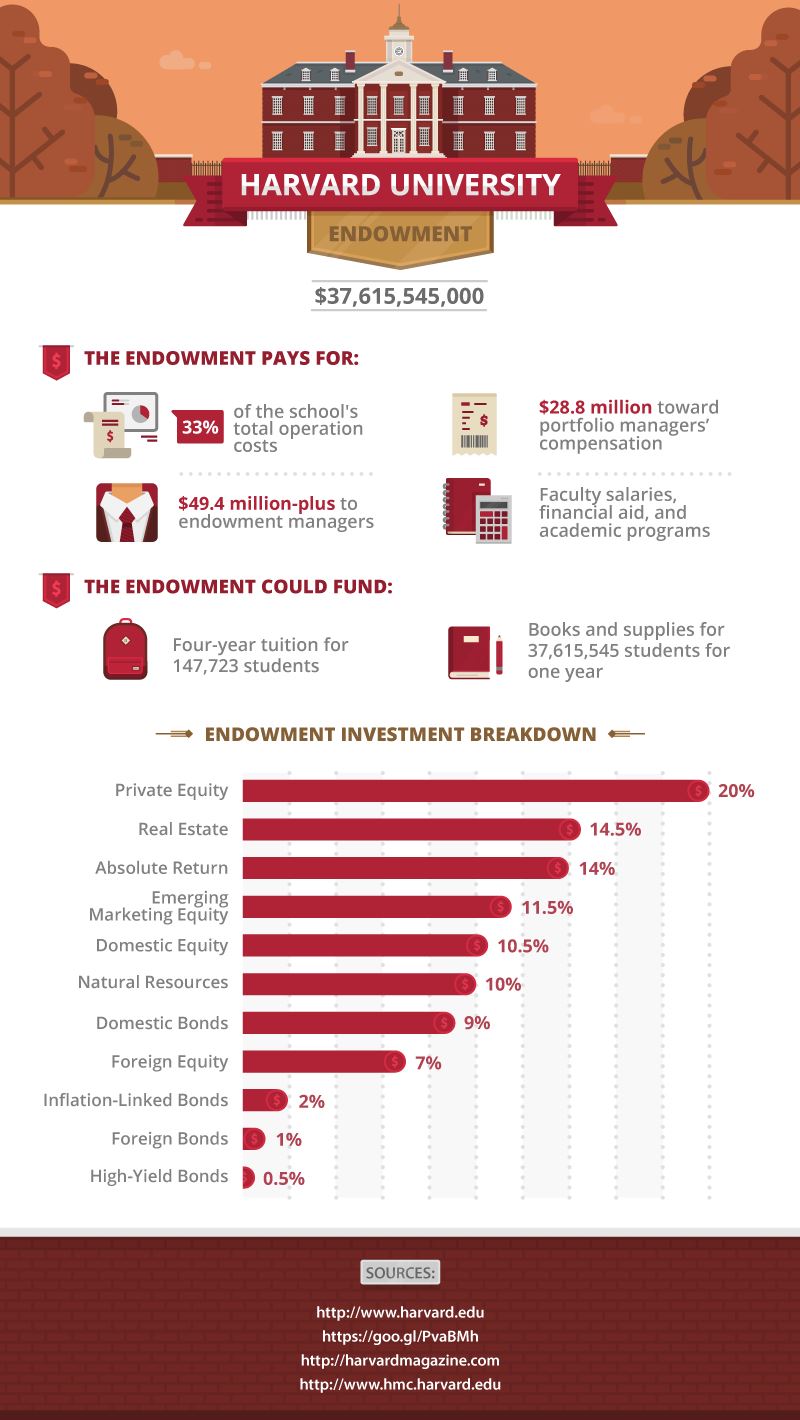 Harvard University, nestled in Cambridge, Massachusetts, currently has an endowment amounting to $37,615,545,000; it places the college at the top of our endowment list.

The school’s fund is currently managed by Harvard Management Company (HMC), which invests Harvard’s financial resources in supporting the university. Harvard goes to great lengths to ensure that those handling its endowment are well taken care of; the institution pays some of its portfolio managers near $10 million. These experts grow the endowment substantially, which allows the school to maintain its status as the wealthiest university in the country.

Although a small percentage of the endowment is directed toward faculty salaries, student aid, and academic programs – realistically, it can pay for a lot more. After crunching the numbers, we found that Harvard’s current endowment can fund the four-year tuition cost for 147,723 students in addition to providing a year’s worth of books and supplies for 37,615,545 future attendees.

The debate still holds that Harvard should focus its resources on bringing in low- and middle-income students to its institution rather than providing free education to the children of wealthy families who may already be able to afford it. According to the Harvard Crimson’s Class of 2019 Freshman Survey, 83 percent of legacy students within the Class of 2019 come from families with household incomes $125,000 or more. 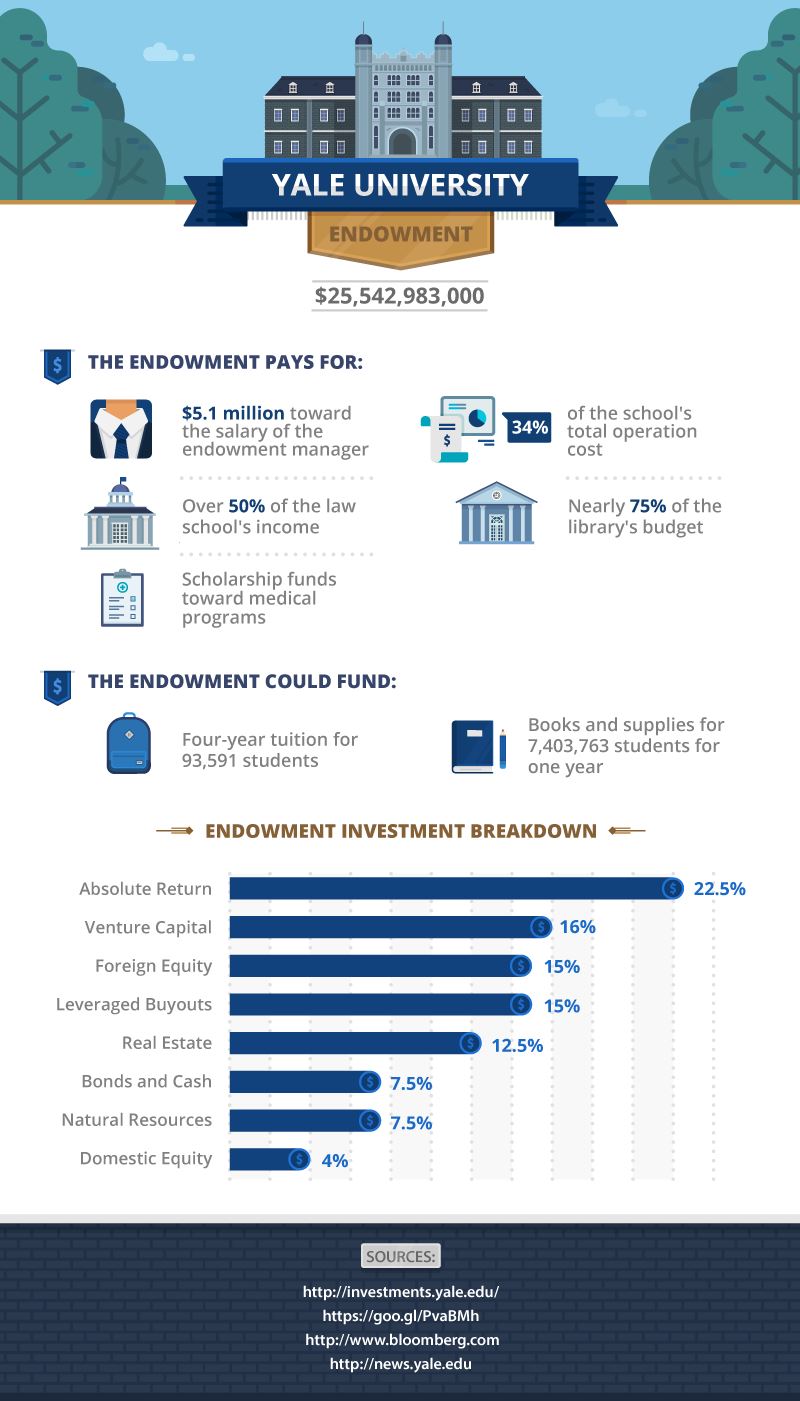 Yale’s endowment is said to be “the engine that drives the university.” It supports 34 percent of the school’s total operation costs. The private university currently has the second largest academic endowment in the nation at a whopping $25,542,983,000.

Compared with its Ivy League rivals, Yale’s investments over the past year yielded positive results – earning it a 3.4 percent return for the fiscal year ending in June 2016. David F. Swensen runs Yale’s Investments Office, which is responsible for determining how much of the university’s allowable endowment should be spent or invested. Swensen earned $5.1 million back in 2014 as the head of Yale’s Investments Office.

Considering Yale’s total enrollment only amounts to 12,385 students, the university could easily afford to cover the cost of its students’ four-year tuition fees. In fact, Yale’s endowment could provide free four-year tuition to approximately 93,591 attendees as well as fund the one-year purchase of books and supplies for 7,403,763 students. 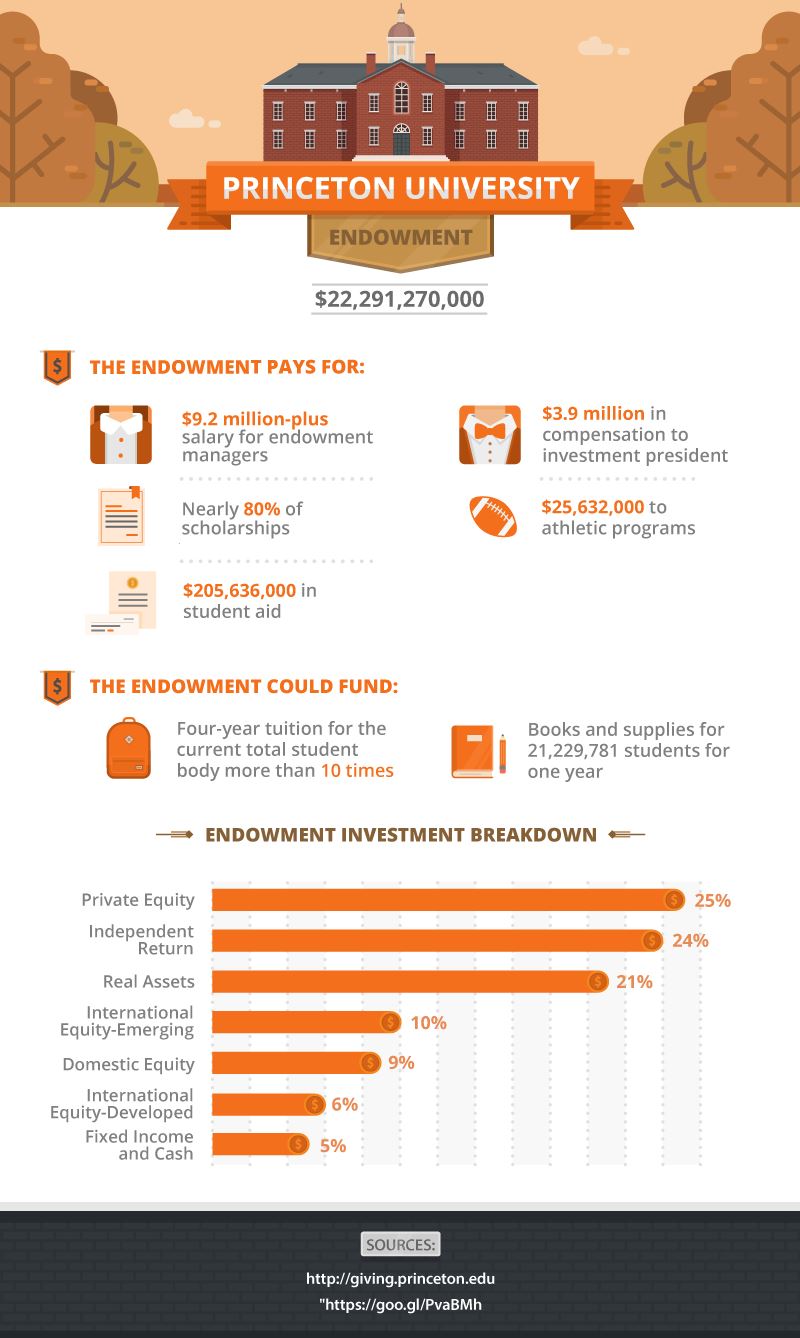 Rounding out the top three universities with the largest endowments in the United States is Princeton University at $22,291,270,000. Princeton’s endowment is managed by Princeton University Investment Company (Princo) and has been built up over the past two centuries from gifts donated by alumni, parents, and friends.

Considering only a relatively small amount of the endowment can be spent each year, the managers are raking in quite the salaries. In 2013 alone, four of the top money managers earned a collective total of $9.2 million; $3.9 million went toward the compensation of Princo’s president. $205,636 was granted to student aid relief and covered almost 80 percent of scholarships.

Princeton endowment funds an exceptional portion of students’ tuition and fees. If a student comes from a family with a median household income of $56,500, then their tuition is completely free. An average grant will cover room, board, and additional fees. Grant support also covers roughly 95 percent of tuition for students coming from families with a household income around $160,000.

Princeton’s endowment, as it stands now, can afford to pay for the tuition of its entire current student body nearly 11 times over or could meet the yearly bill for books and supplies for 21,229,781 future students. It appears that Princeton is heading in the right direction as of early 2016; University Trustees approved a 6.6 percent increase in undergraduate financial aid. 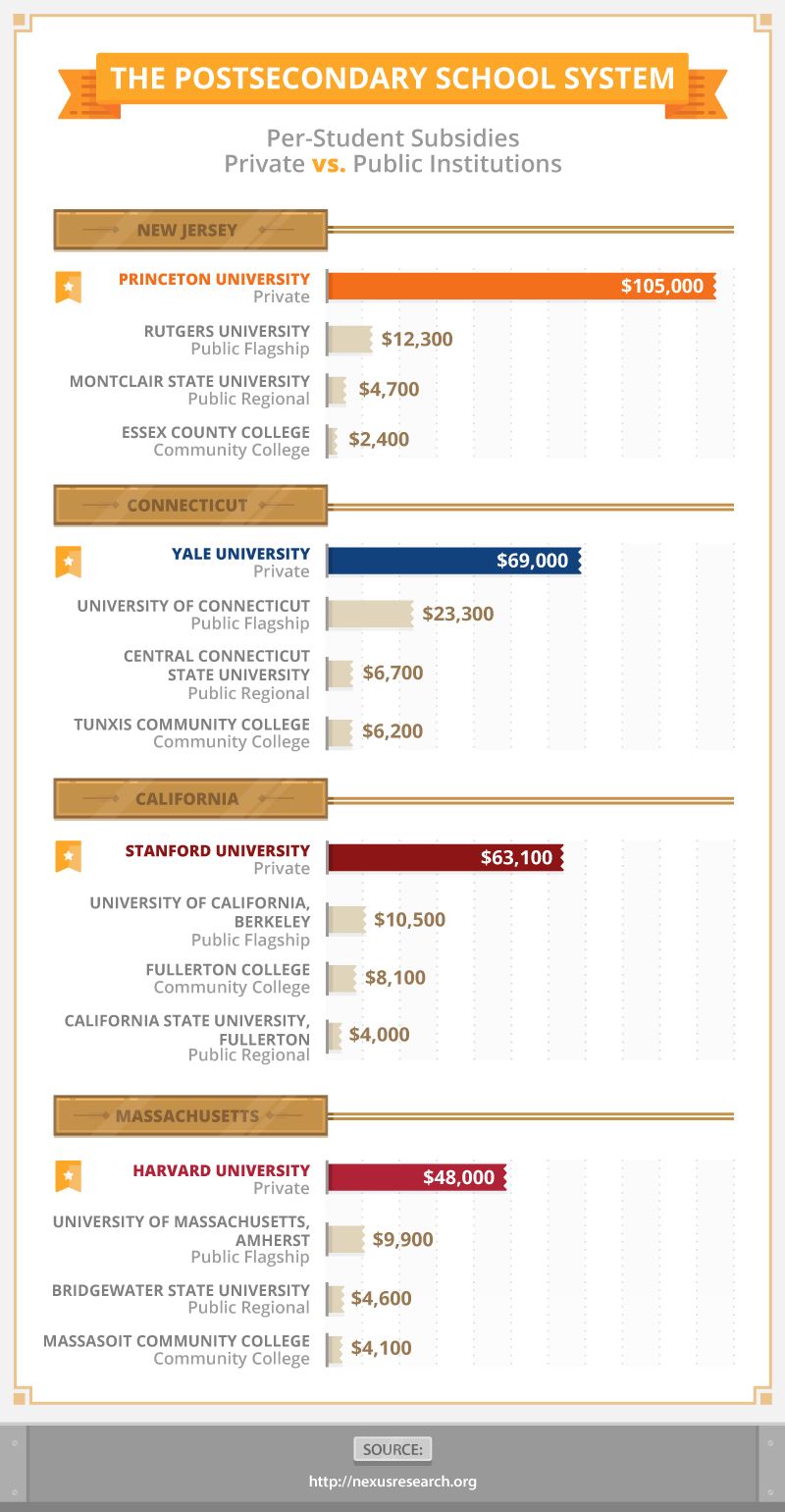 Private institutions across the nation are equipped with the largest academic endowments in the world. The way these universities manage and invest their funds is like a moneymaking machine. And the American public effectively subsidizes, or fuels, each machine’s engine. Endowments are tax exempt due to their “nonprofit” status, which sets them apart from regular hedge funds.

These tax savings translate to money saved by the institution. When we compare the tax subsidies, private universities far outweigh public state schools. For example, thanks to their untaxed earnings from their endowment, Princeton received tax benefits amounting to $105,000 per student, while New Jersey’s flagship public university – Rutgers – received $12,300. Similarly, Stanford collected $63,100 in tax benefits per student, and Fullerton College – a California community college – received $8,100 per student in public funding.

Endowments are university investments. They benefit both the students and the institutions through monetary donations and gifts supplied by alumni and fellow donors alike. While the allocation of funds is dictated by either the donor or endowment management team, both strive to accomplish a similar goal – to better the university in every vertical possible.

Overall, endowments act as money machines that convert dollars into resources used to benefit universities and those who attend them.

To efficiently rank universities by endowment size, we looked at their end-of-fiscal-year endowments for 2015. Criteria such as total enrollment, cost of attendance, and cost of books and supplies were gathered from the webpages of the top three universities.