Planning financially ahead can be difficult, regardless what stage of life you’re in. Maybe that’s why nearly half of Americans over age 50 have less than $25,000 saved towards retirement.

Setting money aside for the future is an important part of financial security. Whether you’ve put together an emergency fund or a designated account for your next vacation, saving money can help you avoid being strapped for cash or facing dire financial situations.

Millennials may understand this concept better than most. Studies show that 60 percent of millennials put away at least 5 percent of their paychecks, while only around half of adults aged 30 years or older do the same.

What matters to millennials when it comes to saving? We surveyed 2,000 people about their spending, saving habits, and the reasons they put cash aside for future endeavors. Continue reading to see what we discovered about Millennials.

Those sad animal shelter ads can be hard to watch, but Gen Xers and millennials would rather save a dollar than donate to the cause. Similarly, when it comes to coupon books, expensive concert tickets, a new smartphone, or even discounted luxury goods – millennials and Gen Xers see more value in saving.

Less tangible purchases seem to be harder to resist. Roughly half of our respondents in both generations were willing to spend at least $50 on taking a friend out for a birthday meal, and the same percentage considered spending $200 to $500 on a weekend getaway to be a worthy splurge.

One of the few things the generations didn’t agree on was whether or not to replace a broken television set. A new TV can set you back between $250 and $1,000. Almost half of millennials said they’d rather save that cash than spend it on a new unit. Perhaps because more millennials aren’t actually watching TV on TV any more, but rather on smart devices like laptops and cell phones. Gen Xers weren’t so convinced – only 35 percent said they were willing to miss prime-time TV and save the money instead.

Buy It or Save It? 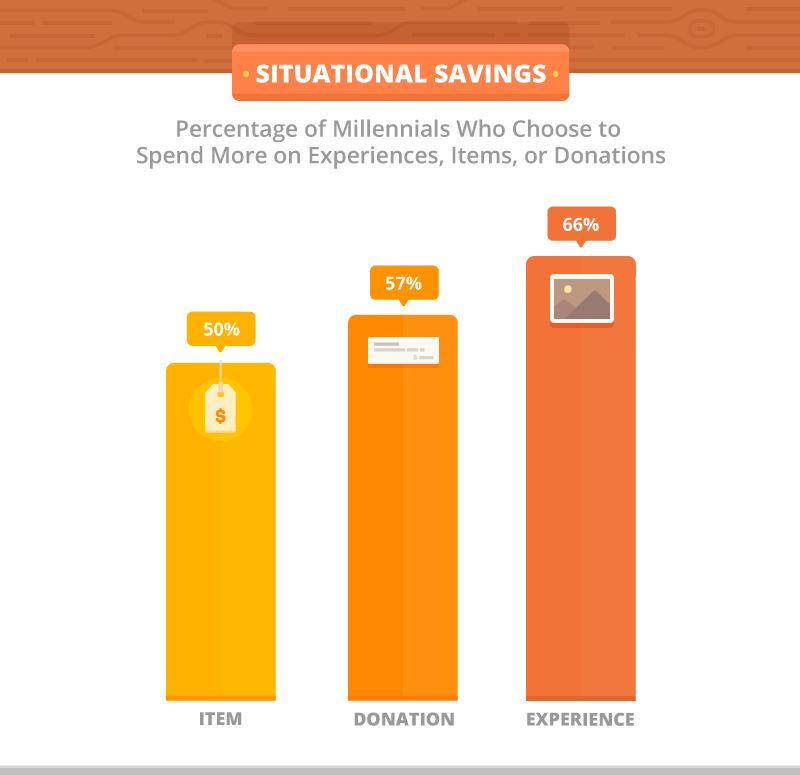 For millennials, the choice is clear. They found experiences (such as eating out or traveling) to be more splurge-worthy than material possessions. Our survey found that almost 66 percent of millennials were likely to spend on experiences and save on purchasing (presumably to fund the aforementioned experiences). In fact, millennials are having a profound impact on the travel industry today, not just because of the frequency of their travels, but because of the way they approach exploring new destinations. Millennials often shy away from traditional travel experiences, like going on a cruise or visiting the beach, in favor of customized travel influenced by sources like social media. And even when millennials travel, the uniqueness of their experiences trumps the popularity of the destinations.

Men and women may not agree on everything, but male and female millennials found common ground in their saving habits.

Overwhelmingly, men and women agreed it was better to save rather than spend on costly splurges, such as new smartphones, expensive handbags (even on sale), and pricey concert tickets. On the other hand, over half were willing to spend money to take a friend out on their birthday, replace a broken TV, and go on a weekend holiday with a significant other.

The only thing they didn’t entirely agree on was whether to save a dollar or donate it to a homeless animal fund. Women were more likely than men to donate the money over saving it. While men and women mostly agreed on big purchases, we’d recommend siding with the ladies on this one. It is, after all, only a dollar. 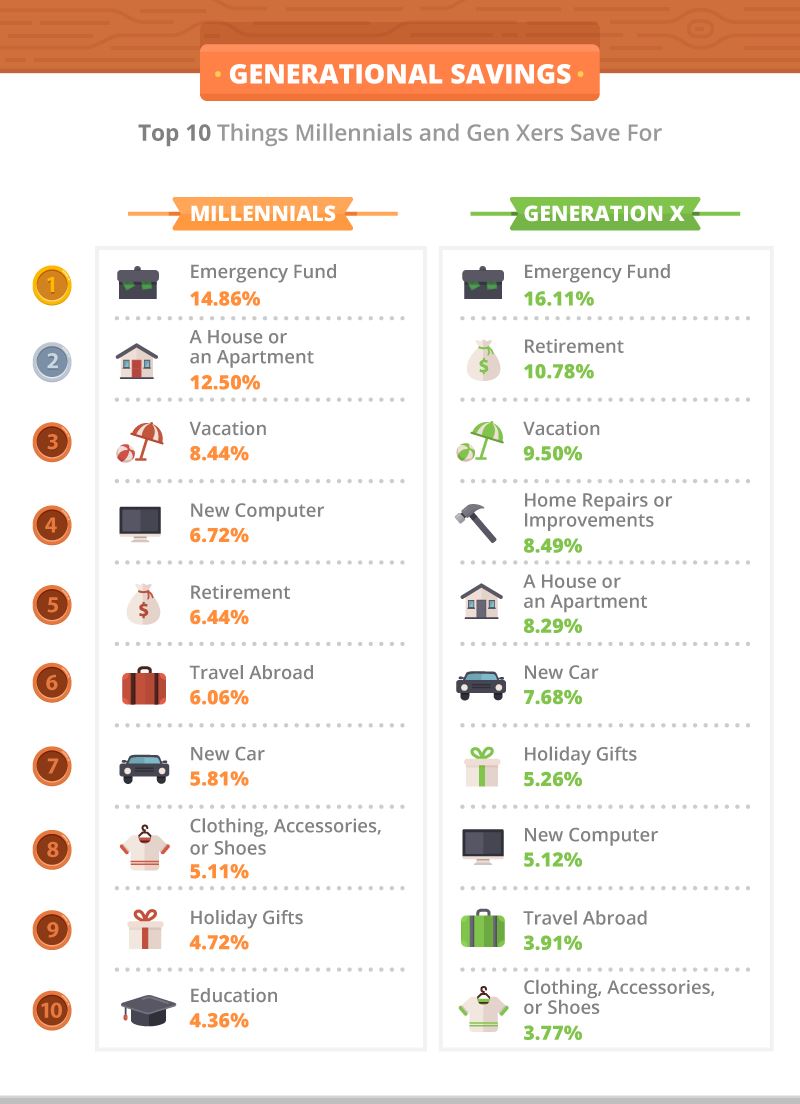 Saving can be a pesky task, but putting more coins in your piggy bank can help you make much more satisfying life decisions down the road.

We asked millennials and Gen Xers what they were most likely to save for. Both generations agreed that saving for an emergency fund was a top priority. From unexpected car repairs to a costly trip to the hospital, emergencies can pop up when you least expect them. Having money put aside can alleviate unnecessary stress and help you navigate a crisis with grace.

Over 12 percent of millennials indicated that buying a house or an apartment was the next most important thing to save for. While studies have shown that young people today aren’t buying houses as often as older generations (either because of the rising cost of education – and subsequent student loans – or a desire for more freedom), this isn’t stopping millennials from saving up for their dream homes.

Gen Xers, on the other hand, were more concerned with their retirement. Almost 11 percent of Gen Xers told us their second priority for saving was retirement. With the average age of retirement in the U.S. on the rise, Gen Xers are focused on ensuring they can kick back and relax as early as possible. 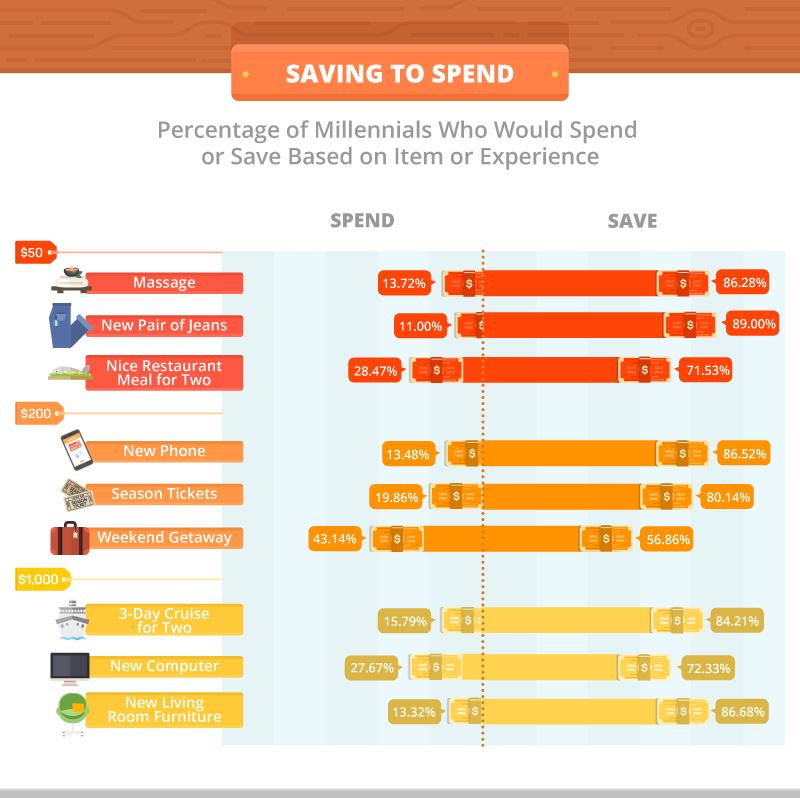 What’s worth buying, and when should you save? We asked millennials to report how much they were willing to splurge on an item, or if they’d rather put that money aside for a rainy day.

Experiences topped the list of worthy expenses. Over 40 percent were willing to spend $200 on a weekend getaway rather than put that money aside for savings, and almost 30 percent said they’d pay $50 to eat at a nice restaurant with a companion.

Of the material possessions a millennial can invest in, a new computer is a pricey one – likely to set the buyer back at least $1,000 – however, over 27 percent of respondents told us it was worth the cash. Millennials deemed less expensive items, like a new pair of jeans, new phone, or season tickets, to be less deserving of their price tags. 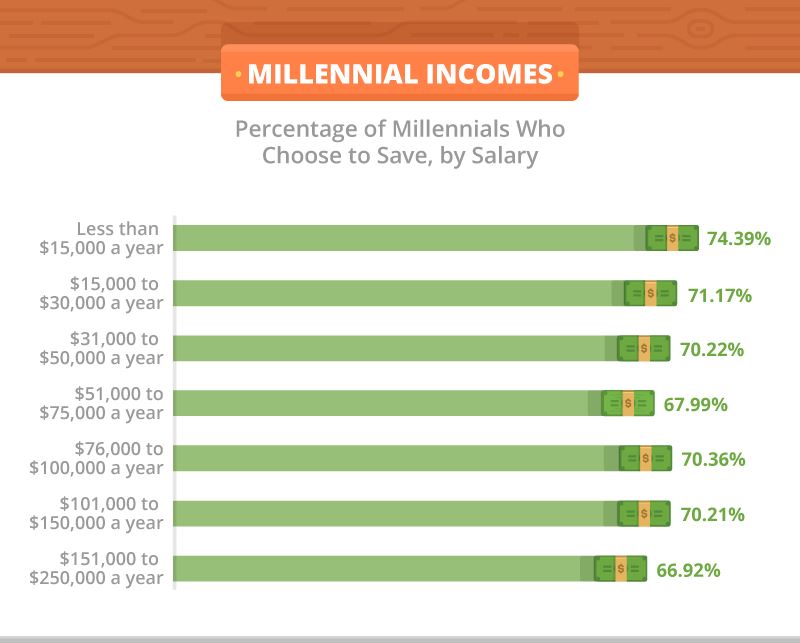 When we looked at how often millennials chose to save by their salary range, we found that over 74 percent of those making less than $15,000 a year made sure to put a lot of that money aside. However, as salaries rose, the likelihood of saving dropped. Less than 72 percent of those who made between $15,000 and $30,000 a year made savings a priority. And still fewer – less than 71 percent – of those who earned $31,000 to $50,000 saw the value in saving.

Respondents whose annual salaries were between $76,000 and $100,000 a year were more inclined to save – around 70 percent of these well-off millennials acknowledged putting their money into some form of savings.

Interestingly, millennials making the least amount of money were the most likely to save, while those who made the most saved the least. 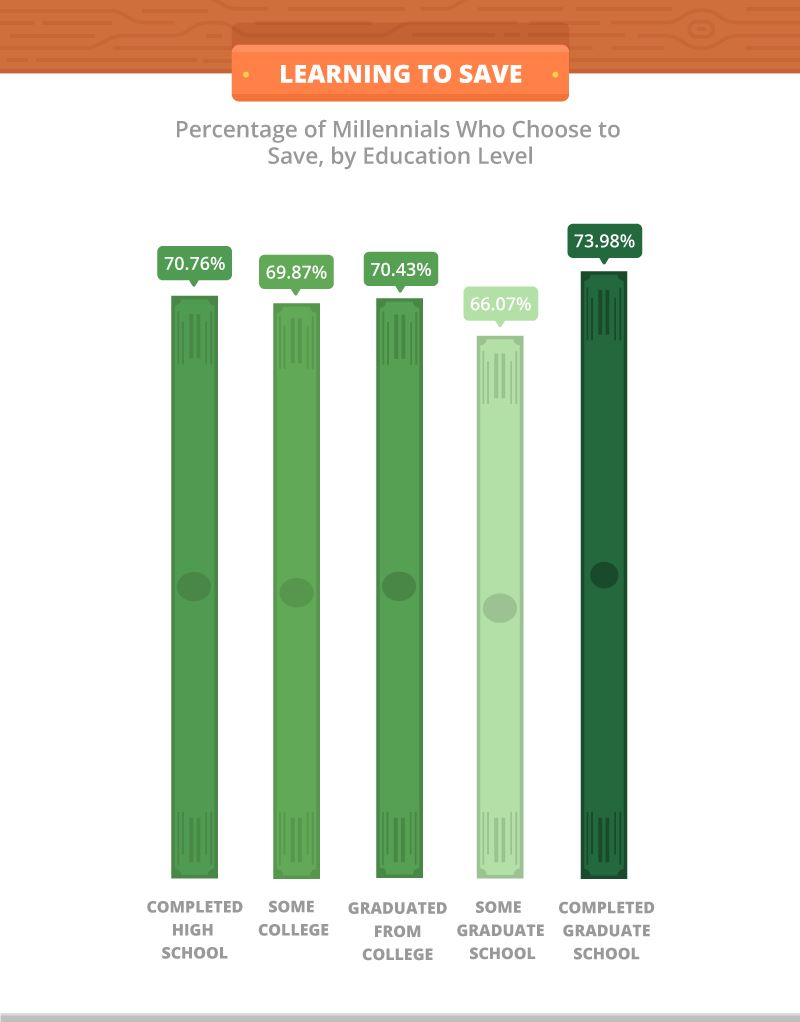 When it came to schooling, higher levels of education didn’t necessarily correlate to an increased likelihood of saving for millennials.

While millennials who completed graduate school reported the best saving habits, those with just a high school education were more likely to save than their counterparts with some college education or a college degree.

Millennials who had some graduate-level education reported saving the least – only 66 percent made saving a priority. With the average graduate program costing $30,000 to $40,000 a year, those still attending school may have a hard time putting aside money for anything other than textbooks and late-night coffee shop visits.

Savings For One, Please 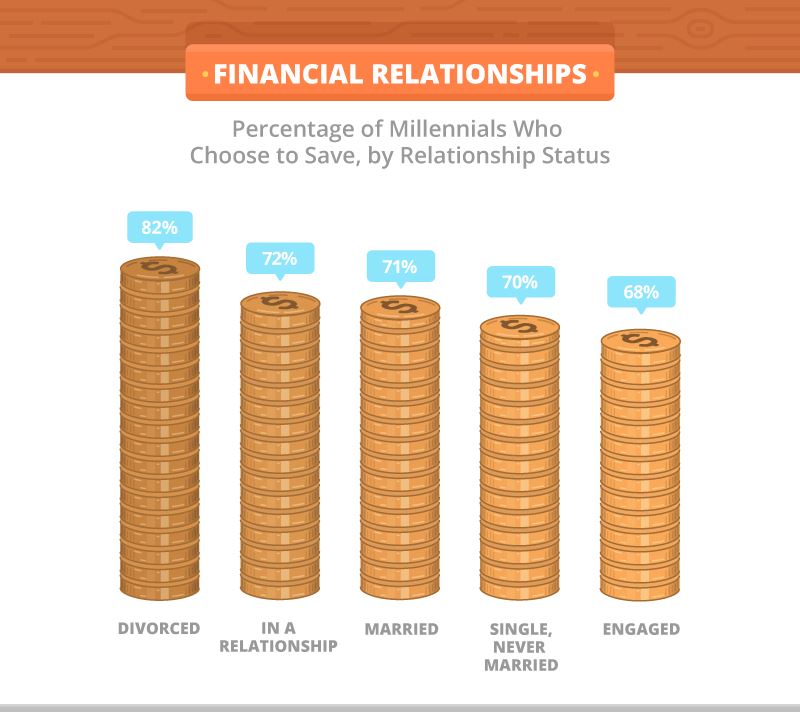 Of those we surveyed, 82 percent of divorced millennials reported some form of financial savings. Divorce isn’t cheap, and millennials who’ve experienced it are more likely to see the value in keeping an emergency fund on hand for whatever comes next.

Around 72 percent of millennials in a relationship and over 71 percent of those married also identified as savers. Weekend getaways or dinner dates for two seem to be worthy causes to keep a few extra dollars in the savings bucket.

Planning For the Future

It can be tough deciding between buying a shiny new toy or placing money into an emergency savings fund – but knowing how to find the best rates for loans and understanding the importance of your credit score is why LendingTree should be your first choice for help in navigating the financial arena. Lending Tree can make sure you’re saving wisely and setting yourself up for a bright and exciting future.